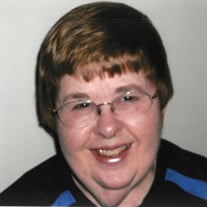 Yvonne Marie “Sis” Nordmeyer of Toronto, died on Sunday, December 19, 2021, at Greenwood County Hospital, in Eureka, at the age of 79. She was born on September 30, 1942, in Emporia, the daughter of Byron LeMoine “Barney” and Grethel LaVerne (Nicholas) Elliott. She was raised in the Quincy area and attended Country School #9 and later Hamilton High School, graduating with the Class of 1960. She later attended business college in Kansas City. On May 24, 1975, Sis was united in marriage to Harry James Nordmeyer in rural Quincy. In the late 70’s, Sis went to work for the Toronto State Park. She retired in the mid 2010’s after 34 years. Sis was a member of the Toronto United Methodist Church. She is survived by her husband, Harry of the home; one daughter, Mindy Nordmeyer of Wichita; three grandchildren; one brother, Don Elliott of Douglass; and numerous nephews and nieces. She was preceded in death by her parents; and three brothers, Darrell Elliott, Larry Elliott, and Gaylord Elliott. Funeral services will be held at 2:00 P.M., Monday, December 27, 2021 at the Toronto United Methodist Church in Toronto with Pastor Kevin Lawrence officiating. Interment will follow at Toronto Cemetery. In lieu of flowers, the family requests that memorials be made to the Toronto Senior Center or the Toronto United Methodist Church. Contributions may be sent in care of Koup Family Funeral Home, PO Box 595, Eureka KS 67045, which is overseeing arrangements. Condolences may be left for the family online, at koupfunerals.com.

The family of Sis Nordmeyer created this Life Tributes page to make it easy to share your memories.

Send flowers to the Nordmeyer family.