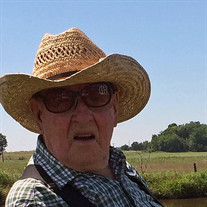 Willis Eugene Liebau of Toronto, Kansas, died Friday, December 21, at Yates Center Health and Rehab in Yates Center, at the age of 89. Willis was born, January 13, 1929, on the family farm in rural Woodson County, the son of Frederick William and Lucy Elizabeth (Tannahill) Liebau. He attended Stony Point School. Following his education, Willis helped out on the family farm and helped the neighbors shuck corn. He spent a short time living in California working in a doorknob factory, before he returned to his beloved family home. Upon his return, Willis worked helping to build the Toronto Dam and as an assistant to the local veterinarian, “Doc” Smith. When his parents passed away, Willis inherited the family farm where he spent the remainder of his life. On December 22, 1993, Willis was united in marriage to Mae Francis (Woods) Shinkle in Miami, Oklahoma. She preceded him in death on November 1, 2014. Willis is survived by one sister, Nettie Roberts of Wichita; two brothers: Floyd Liebau of Baldwin Park, California and Ottie Liebau of San Gabriel, California; eight nieces; seven nephews; and several grand-nieces, grand-nephews, and cousins. He was preceded in death by his parents, his wife, two half-brothers, Ervin McCoy and Eddie McCoy and one half-sister, Anita Platt. Funeral services are set for 1:00 P.M., Saturday, December 29, at the Cowboy Church and The Arena of Life in Toronto, with Pastor Jon Petty officiating. Interment will follow at Toronto Cemetery. Visitation hours are set from 5:00 P.M. – 7:00 P.M., at the funeral home. In lieu of flowers, the family has requested that memorials be made to the Harry Hynes Hospice or to the American Cancer Society. Contributions may be sent in care of Koup Family Funeral Home, P.O. Box 595, Eureka, KS 67045 which is overseeing arrangements. Condolences may be left for the family online, at koupfunerals.com

Willis Eugene Liebau of Toronto, Kansas, died Friday, December 21, at Yates Center Health and Rehab in Yates Center, at the age of 89. Willis was born, January 13, 1929, on the family farm in rural Woodson County, the son of Frederick William... View Obituary & Service Information

The family of Willis Eugene Liebau created this Life Tributes page to make it easy to share your memories.

Send flowers to the Liebau family.