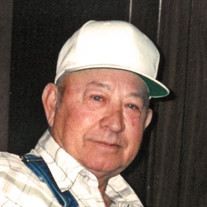 William Lawrence “Bill” Williams, formerly of Reece, passed away on Saturday, March 2, 2019 at Homestead of El Dorado, at the age of 87. He was born on December 30, 1931, in Lamar, Colorado, the son of Clyde Ernest “Buddy” and Gladys Centelia (Nelson) Williams. He was raised in Neal and attended local schools. On November 25, 1953, Bill was united in marriage to Marjorie Ann Hughes in Wichita. They made their home in Wichita. To this union, two children were born. He worked at Cessna for a short time before moving to the farm at Reece. He ranched there until his retirement at which time they moved into the city of Eureka. He enjoyed playing cards and dominoes with friends and family. Dancing and socializing were always a favorite pastime. He is survived by their children, Janet Williams of Eureka; and Tom and wife, Susan Williams of El Dorado; four grandchildren: Katie and husband, Lamont Villa of Westminster, Colorado; Sara Williams and husband, Pal of El Dorado; Marcus and wife, Denelle Williams of Augusta; and Molly and husband, Tyler McCune of El Dorado; eight great-grandchildren; and siblings, Dolores Ashlock of Eureka; Bob Williams of Eureka; Grover Williams of Searchlight, Nevada; Marjorie Whitehall of Belfair, Washington; and Melvin Williams of Stroud, Oklahoma. He was preceded in death by his parents; wife, Marjorie; infant grandson, Thomas Lawrence Williams, Jr; and seven siblings, Johnnie Williams, Cecil Williams, Maxine Wilson, Melba Pugh, Erma Sherman, Donald Williams, and Sue Laughlin. Funeral services will be held at 2:00 P.M., Friday, March 8, 2019 at Koup Family Funeral Home, in Eureka with Mr. Jayme A. Koup officiating. Interment will follow at Reece Cemetery. Visitation hours are set from 5:00 P.M. to 7:00 P.M., Thursday, at the funeral home. In lieu of flowers, the family has requested that memorials be made to Serenity Hospice. Contributions may be sent in care of Koup Family Funeral Home, P.O. Box 595, Eureka, KS 67045, which is overseeing arrangements. Condolences may be left for the family online, at koupfunerals.com.

The family of Bill Williams created this Life Tributes page to make it easy to share your memories.