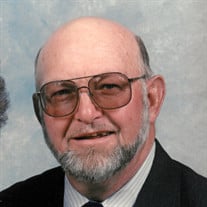 William Clarence “Hig” Higinbotham, formerly of Moran, KS, died on Monday, March 6, 2017 as a result of vascular dementia, at the Eureka Nursing Center in Eureka, at the age of 76. He was born on March 15, 1940, in Elsmore, KS, the son of Emerson Kenneth and June Olive (Wilson) Higinbotham. He was raised in Moran and graduated from Moran High School. Following high school he joined the United States Marine Corps where he served with dignity and honor. He was honorably discharged in 1964. On November 21, 1959, Bill was united in marriage to Joyce Elaine Smith, in Mildred, KS. To this union three children were born. Following his service to his country, Bill went to work for H. K. Porter, and later for Churchill Pumpjack. He then began his career as a welder in power plants for the next 30 years, until his retirement. He loved to fish, hunt, and travel in his free time. He was a member of the Boilermakers Union Local #83 of Kansas City. Bill is survived by his wife, Joyce of Wichita; two sons, Brian Higinbotham and wife, Tracy, of Silver Lake, KS; and Kenneth Higinbotham and wife, Michelle, of Muscle Shoals, AL; one daughter, Lanette and husband, Michael Kress of Goddard, KS; five grandchildren; one great-grandchild; one brother, Don Higinbotham of LaHarpe, KS; and one sister, Kay Naff of Independence, KS. He was preceded in death by his parents. Memorial services will be held at 1:30 P.M., Thursday, March 9, 2017 at the Moran Christian Church. Inurnment will take place at 9:00 A.M., Friday, March 10, 2017, at Fort Scott National Cemetery in Fort Scott, KS, with Pastor Bill LaPorte of the Moran Christian Church, officiating. Cremation has been effected. In lieu of flowers, the family has requested that memorials be made to Rivercross Hospice. Contributions may be sent in care of Koup Family Funeral Home, P.O. Box 595, Eureka, KS 67045, which is overseeing service arrangements. Condolences may be left for the family online, at koupfunerals.com.

The family of William Clarence Higinbotham created this Life Tributes page to make it easy to share your memories.

Send flowers to the Higinbotham family.