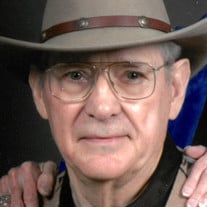 Dr. William S. Hart of Eureka, died on Saturday, October 17, 2020, at Vintage Park in Eureka, at the age of 88. He was born on November 28, 1931, in Dewey, Oklahoma, the son of Perry J. and Letha Elizabeth (Cotton) Hart. He was raised in Oklahoma and Kansas and graduated from Eureka High School. He then attended Emporia State Teachers College, completing a Master’s in Education degree. In 1953, Bill was united in marriage to Carol Ann Smethers in Eureka. After receiving his degree, he served two years in the United States Army, stationed in Germany. Upon his discharge, the family moved to Florida where Bill continued his education, completing a PhD in Education at the University of Florida. He and his wife then moved to Oxford, Mississippi where he taught management courses at the University of Mississippi. Bill’s career opportunity brought him to Murfreesboro, Tennessee as a teaching professor to business administration at Middle Tennessee State University, where he remained until retirement. He and his wife, then made their home in Eureka. He continued his professional career by becoming a nationally recognized Federal Arbitrator. He was an active member of the First United Methodist Church of Eureka and an active advocate and supporter for the city’s restoration. He will be remembered by those who knew him as a protector and lover of all animals. He had a gentle, caring heart and left his mark forever in the hearts of many. Bill is survived by his beloved wife of 67 years, Carol of the home; and brother, Sam Hart of Summerfield, Florida; and nephews, Kent Hart of Coral Springs, Florida; Michael Hart of Tampa, Florida; Mark Hart and Daniel Hart of Hollywood, Florida; and niece, Angela Overbeek of Holland, Michigan. He was preceded in death by his parents. Memorial services will be held at 1:00 P.M., Saturday, November 7, 2020, at Greenwood Cemetery, in Eureka with Rev. Hyun Jung Choi of the Eureka United Methodist Church officiating. Masks should be worn and social distancing observed. Cremation has been effected. In lieu of flowers, the family requests that memorials be made to the First United Methodist Church or to the Greenwood County Hospital Foundation. Contributions may be sent in care of Koup Family Funeral Home, P.O. Box 595, Eureka, KS 67045, which is overseeing arrangements. Condolences may be left for the family online, at koupfunerals.com.

Dr. William S. Hart of Eureka, died on Saturday, October 17, 2020, at Vintage Park in Eureka, at the age of 88. He was born on November 28, 1931, in Dewey, Oklahoma, the son of Perry J. and Letha Elizabeth (Cotton) Hart. He was raised in Oklahoma... View Obituary & Service Information

The family of Dr. William S. Hart created this Life Tributes page to make it easy to share your memories.

Send flowers to the Hart family.