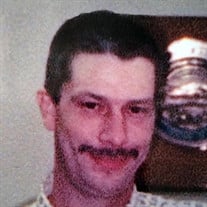 William Robert “Bill” Gaines, of Eureka, peacefully departed this world at home in Eureka, in his favorite safe haven, on October 8, 2020, at the age of 54. He was born on November 18, 1965 in El Dorado, Kansas, the son of Franklin Delano and Barbara Ann (Barnes) Gaines. He was raised in Augusta, Longton, and Burkett, graduating from Longton High School with the Class of 1984. After graduation, he earned a welding certificate in Tulsa, Oklahoma. He began working in the oilfields and ranching at Burkett west of Hamilton, Kansas. On January 24, 1986, Bill was united in marriage to Deana Felter in Eureka, Kansas. They made their home in Eureka. Bill was an outdoorsman. Few ever out-fished him. As a teen, he kept the freezer stocked with venison. His true talent was mechanical. He could fix anything with moving parts, and often diagnose the problem at a glance. His favorite hobbies were evening walks with his beloved wife Deana, fishing, gardening, cutting firewood, cheering the Kansas City Chiefs, and loving his pet cats. He was also active in the 101 Club in Wichita. He is survived by his wife, Deana of the home; three children, Terra and husband, Dal Lockwood of Winfield, Kansas; James and wife, Jennie Bumgardner of Leon, Kansas; and Sylvia and husband, Jeff Scott of Leoti, Kansas; 9 grandchildren: Tanner, Bryce and wife, Brittany, Jaden and wife, Brittany, Madison, Logan, Franke, Coben, and Braxton; one great-grandchild on the way; sister, Betheny Winkler of Sante Fe, New Mexico; step-mother, Beverly Gaines Tipton of Hamilton, Kansas; and step-brother, Shelby Summers of Seattle, Washington. He was preceded in death by his parents; brother, Franklin Delano “Del” Gaines, Jr.; and one nephew, Jacob Winkler. Memorial services will be held at 2:00 P.M., Saturday, October 24, 2020, at Greenwood Cemetery, in Eureka with Pastor Richard Schmidt of the New York Valley Church of Yates Center officiating. Masks should be worn and social distancing observed. Cremation has been effected. In lieu of flowers, the family has requested that memorials be made to the Greenwood County Hospital Foundation. Contributions may be sent in care of Koup Family Funeral Home, P.O. Box 595, Eureka, KS 67045, which is overseeing arrangements. Condolences may be left for the family online, at koupfunerals.com.

The family of Bill Gaines created this Life Tributes page to make it easy to share your memories.

Send flowers to the Gaines family.