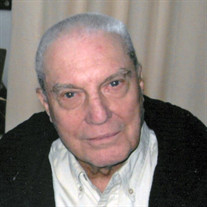 William Henry “Bill” Cummings died Saturday, June 17, 2017, at Eureka Nursing Center in Eureka at the age of 95. Bill was born September 27, 1921, in Fall River Township, Greenwood County, KS, to John Edward and Millie Belle (Wright) Cummings. He attended schools in Fall River and graduated from Fall River High School. Bill worked along with his father, brothers and sisters on their farm and blacksmith shop, north of Fall River. In April 1944, Bill’s father had not returned from working in the field and Bill went and found him deceased from an apparent heart attack. At 22, Bill and brother Ellis took over caring for his mother and the family farm, as brothers John and Charley were married and had moved away; and Gene was serving in WW II. On December 26, 1945, Bill was united in marriage to Marcella May Benson in Eureka. They remained on the family farm caring for Bill’s mother. Within a few years, they bought a farm between Neal and Toronto, where they raised their four children. Bill lived and breathed farming and was very meticulous and deliberate with his work. He also worked part-time as a carpenter building house and various other carpentry work. In 1959 he proudly completed construction of a new home on his own farm where he raised his children. Bill and son, Cliff entered a farming partnership in 1980 which continued until Bill retired in 1986. He moved to Eureka in 1989, but even following retirement, continued working with Cliff until 2004, when macular degeneration took his sight. Marcella preceded him in death on June 18, 2007. Following her death, Bill moved to Vintage Park until his final month, when he moved to Eureka Nursing Center. He will forever be remembered as a great and hard and focused working farmer, and most of all as a great father and provider, teaching the importance of personal responsibility, work ethic, and moral values. Bill is survived by three daughters: Barbara Ann Poettgen of San Antonio, TX; Sharyl Virginia Cummings of Tucson, AZ; and Ethel Anita Overstake of Wichita, KS; one son, Clifford Dean Cummings of Toronto, KS; eight grandchildren; ten great-grandchildren; and one sister, Mary Fay Thompson of Wichita, KS. He was preceded in death by his parents; wife Marcella; four brothers: John Marshal, Charles Orland, Eugene, and Ellis Edward Cummings; and two sisters: Edna Claire Claiborn; and Helen Wygle. Funeral services will be held at 2:00 P.M., Thursday, June 22, 2017 at Koup Family Funeral Home in Eureka with Pastor Warren Olson of the Neal Methodist Church of Neal, KS officiating. Interment will follow at Greenwood Cemetery. In lieu of flowers, the family has requested that memorials be made to the Macular Degeneration Association. Contributions may be sent in care of Koup Family Funeral Home, P.O. Box 595, Eureka, KS 67045 which is overseeing arrangements. Condolences may be left for the family online, at koupfunerals.com

The family of William Henry "Bill" Cummings created this Life Tributes page to make it easy to share your memories.

Send flowers to the Cummings family.