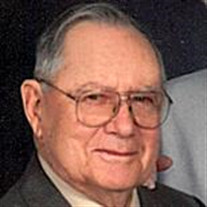 William Granville Courter, died Monday, October 26, 2015, at Eureka Nursing Center, in Eureka, Kansas at the age of 87. He was born on January 31, 1928, in rural Climax, the son of Charles and Marian (Devier) Courter. He was raised in rural Greenwood County and attended Climax schools, graduating from Climax High School. After graduation, he joined the United States Army, where he served 1 year in Japan. In 1948, he was united in marriage to Dorothy Campbell. They made their home in rural Climax. To this union, three children were born. Dorothy preceded him in death in 1973. On November 30, 1974, Bill was united in marriage to Eleanor (Troll) Hawthorne in Eureka. They made their home in rural Severy and moved to Eureka in 2005. Bill was a lifelong farmer and resident of Greenwood County. He worked for Boeing for 16 years, retiring in 1994. He was a member of Sacred Heart Catholic Church and the Knights of Columbus. He is survived by his wife, Eleanor of the home; two sons, Jerry and wife, Terri Courter of Augusta; and Ray Courter of Topeka; four step-children, Carmen and husband, Tim Ashlock of Bonner Springs; Carol Westbrook of Eureka; David and wife, Peggy Hawthorne of Eureka; and Shelley and husband, Gary Houser of Wamego; five grandchildren; eleven step-grandchildren; seven great-grandchildren; and numerous step-great-grandchildren; and one sister, Jean Marchand of Wichita. He was preceded in death by his parents; wife, Dorothy; son, Larry; and brother, Clayton. Funeral mass will be held at 10:30 A.M., Saturday, October 31, 2015 at Sacred Heart Catholic Church in Eureka with Father Steve Gronert officiating. Rosary recitation will begin at 10:00 A.M. Cremation has been effected. Inurnment will follow at Greenwood Cemetery. In lieu of flowers, the family has requested that memorials be made to Sacred Heart Catholic Church. Contributions may be sent in care of Koup Family Funeral Home, P.O. Box 595, Eureka, KS 67045, which was in charge of service arrangements.

William Granville Courter, died Monday, October 26, 2015, at Eureka Nursing Center, in Eureka, Kansas at the age of 87. He was born on January 31, 1928, in rural Climax, the son of Charles and Marian (Devier) Courter. He was raised in rural... View Obituary & Service Information

The family of William G. "Bill" Courter created this Life Tributes page to make it easy to share your memories.

Send flowers to the Courter family.