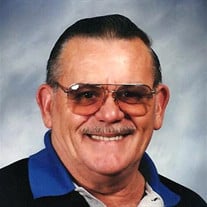 William Wayne “Bill” Cole of Eureka, died on Thursday, June 11, 2020, at his home in Eureka, at the age of 80. He was born on October 16, 1939, in Emporia, Kansas, the son of Wayne Clifton and Mildred Anita (Pirtle) Cole. He was raised in Emporia through grade school and later moved to Osage City, Kansas. He graduated from Osage City High School. After graduating he drove a cattle truck until 1961. On June 25, 1961, Bill was united in marriage to Mildred Irene “Millie” Cole in Osage City. They made their home in Madison. To this union, three children were born. Bill worked for the Ford dealership there as well as opening the Madison Café with Millie. In 1969, the family moved to Eureka. Bill was the service manager for the Ford dealership in Eureka and served on the Eureka City and Greenwood County Volunteer Fire Departments. In 1975, Bill and Millie opened Cole Auto & Wrecker. They operated the business together until Bill’s health forced him to retire in 2013. He had retired from the fire department as Central Division Chief in 2007. He also was a special deputy for Sheriff Charlie Samuels, Lowell Parker, and Matt Samuels. Millie preceded him in death in 2013. Bill is survived by his children, Joanna and Marty Hunter of Howard, Kansas; Diana Cole of Eureka; and Daniel Cole of Baldwin City, Kansas; seven grandchildren: Chris and wife, Dana Hunter; Amanda Linton; Clay Hunter; Ashlyn and husband, Nick Gessler; Tony Huston and partner, Kodi Scates; Brooklyn Cole; and Carlyn Cole; six great-grandchildren; and two sisters, Connie Lou Garrett of Saint Petersburg, Florida; and Lois Jones of Madison, Wisconsin. He was preceded in death by his parents, Wayne and Mildred, step-father, James Steen; wife, Millie; and two sisters, Elaine Dunn and Mable Shown. Graveside services will be held at 10:00 A.M., Monday, June 15, 2020 at Greenwood Cemetery, in Eureka with Mr. Judd Everitt officiating. In lieu of flowers, the family has requested that memorials be made to Hand in Hand Hospice or to the Chautauqua County Animal Shelter Transport. Contributions may be sent in care of Koup Family Funeral Home, P.O. Box 595, Eureka, KS 67045, which is overseeing arrangements. Condolences may be left for the family online, at koupfunerals.com.

The family of Bill Cole created this Life Tributes page to make it easy to share your memories.

Send flowers to the Cole family.