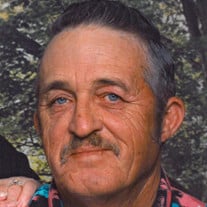 William Harold Beck, Jr. of Eureka, died Saturday, December 3, 2016 at Susan B. Allen Memorial Hospital in El Dorado at the age of 75. He was born July 7, 1941 in Shattuck, Oklahoma, the son of William Harold, Sr and Ida Marie (Boyer) Beck. He was raised in the panhandles of Oklahoma and Texas until 1954 when the family moved to the Eureka area. He attended schools in the Eureka area and graduated from Tonovay High School. He helped his father on the farm, worked in dirt construction, and the oil fields. In 1963, Harold was united in marriage to Carolyn Renollett. To this union one son, Harold Dean Beck was born. This marriage later ended in divorce. On February 16, 1968, Harold was united in marriage to Almeta Rae Lahar. They made their home in Great Bend, Kansas until 1972 when they returned to Eureka. Harold is survived by his wife, Almeta of the home; three sons, Harold Dean and wife, Renee Beck of Tulsa, Oklahoma; William Christopher and wife, Sonia Beck of Emporia; and Darren Illie Beck of Park City; six grandchildren, Harold Dean Beck, Jr., Corbin Beck, Jacob Beck, LySandra Beck, Rachel Beck, and Michael Beck; one great-grandson, Gavin Beck; and one brother, George Beck of Americus. He was preceded in death by his parents, two brothers, and one sister. Memorial services will be held at 2:00 PM Saturday, December 10, 2016 at Greenwood Cemetery with Pastor Gary Boles of the Moline Community Fellowship officiating. In lieu of flowers the family has requested that memorials be made to the Eureka Public Library. Contributions may be sent in care of Koup Family Funeral Home, P.O. Box 595, Eureka KS 67045, which is overseeing arrangements. Condolences may be left for the family online at koupfunerals.com

The family of William Harold Beck Jr created this Life Tributes page to make it easy to share your memories.

Send flowers to the Beck family.