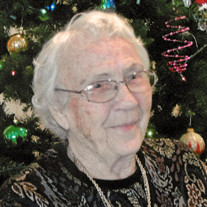 Wildine Allan of Eureka passed away Thursday, October 11, 2018, at Vintage Park Assisted Living in Eureka, following a recent diagnosis of cancer, at the age of 98. She was born near Utopia, Kansas, on August 26, 1920, the younger daughter of William Leonidas and Mary Magdalene (Denner) Wilson. She never got to see her father, Will, as he passed away five months before her birth of the Spanish Flu. Her mother, her sister, Agnes, and Wildine lived with her Denner grandparents for several years, where both girls began their education at Tonovay School. After Mary Wilson wed Charles K. Cross, they moved to Climax, Kansas where both daughters attended Climax schools, played tennis and basketball, graduated from Climax High School, and were baptized and attended the Climax Methodist Church. Following her graduation, she enrolled in Nurse's Training in Wichita, which she enjoyed until a back injury forced her to quit and return back to Climax. She was united in marriage to John Wesley Allan in Winfield, Kansas on June 14, 1939. Shortly thereafter, they moved to Borger, Texas where John was employed at the Phillips Petroleum Refinery as a carpenter. They then returned to Wichita, Kansas where John helped build airplane hangars for Boeing Aircraft. When he was drafted into the Navy during World War II, they moved to Eureka to be near family as Wildine was pregnant with their third daughter, while he served on a Navy ship. After the war ended, they moved to her parents' family farm near Tonovay in 1948, living in a small, four-room house until building their new home in 1958. They farmed, raised cattle, pigs, chickens, and Wildine planted huge gardens and they developed a large orchard. While John was a self-employed carpenter by day and farmed evenings and weekends, she took care of the house, animals, and garden and orchard produce. She had beautiful flowerbeds and was known for sharing flowers, garden and fruits with everyone. They raised their own bees and made lots of honey, processed their own apple cider by the gallons, canned and would freeze large quantities of produce. She was known as an excellent cook. She became a leader of the Bachelor Buttons 4-H Club of Tonovay which her three daughters joined as soon as they became eligible and continued as a leader from around 1950 through 1962. She also belonged to the Tonovay Ladies Club and EHU until they disbanded. Wildine and John built a beautiful goldfish lily pond in their yard, which they loved, and many people enjoyed. They also hauled loads of pretty rocks which she formed into extensive flowerbeds. In later years she became an avid reader of books and magazines, and especially enjoyed visits from her grandkids, family and friends throughout the years. When John passed away in 1995, she remained on their farm and spent at least two days per week mowing the lawn until she was forced to move to Vintage Park in as she kept falling and breaking various bones. Her beloved farm was auctioned in 2014. She was well known for her spirit and determination. She had originally set a goal of attaining age 100, but with her cancer diagnosis she altered her plans, stating that she had lived a good, long life, had lots of wonderful memories, but was ready to go. Wildine is survived by two daughters: Judith and husband, Daryl Lewis of Piedmont, Kansas; and Suzanne and husband, Ronald Rowe of Chanute, Kansas; five grandchildren: Linton and wife, Cindy Lewis of Aiken, South Carolina; Bret Allan Rowe of Topeka; Melissa Atwood of Osage City; Dieter Jon Gran of Wichita; and Angela Libby of Wichita; three great-grandchildren: Gage Atwood of Lawrence; Ashley Kortkamp and Briar Libby of Wichita. She was preceded in death by her parents and step-father; husband, John Allan; daughter, Marilyn Gran; and her sister Agnes (Wilson) Coats. Funeral services are set for 2:00 P.M., Saturday, October 20, 2018, at Koup Family Funeral Home with Pastor Kevin Lawrence of the Climax United Methodist Church officiating. Interment will follow at Greenwood Cemetery in Eureka. In lieu of flowers, the family has requested that memorials be made to the First United Methodist Church or to the Greenwood County Historical Society Museum. Contributions may be sent in care of Koup Family Funeral Home, P.O. Box 595, Eureka, KS 67045, which is overseeing arrangements. Condolences may be left for the family online, at koupfunerals.com.

Wildine Allan of Eureka passed away Thursday, October 11, 2018, at Vintage Park Assisted Living in Eureka, following a recent diagnosis of cancer, at the age of 98. She was born near Utopia, Kansas, on August 26, 1920, the younger daughter... View Obituary & Service Information

The family of Wildine Allan created this Life Tributes page to make it easy to share your memories.

Send flowers to the Allan family.