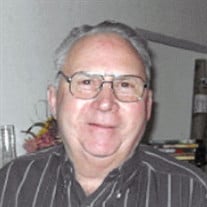 Wayne Paul Williams of Eureka, died on Sunday, July 5, 2020, at Greenwood County Hospital in Eureka, at the age of 79. He was born September 28, 1940, in Shawnee, Oklahoma, the son of Paul Joseph “P. J.” and Francis Gertrude (Smith) Williams. He was raised in the Shawnee area and attended local schools. On September 27, 1968, he was united in marriage to Sherry (Stuber) Trimble in Eureka, Kansas. They made their home in Wichita for 30 years where Wayne worked in retail sales for Kitty Clover Potato Chip Company and in aircraft assembly for Boeing Aircraft Co. In 2003 they retired to Eureka. Wayne is survived by wife, Sherry of the home; one daughter, Tina Lawrence of Wichita; and one grandson, Max Henry Lawrence of St. Paul, Minnesota. He was preceded in death by his parents; two sisters, Patsy Kisor and Ruth Doss; and a brother, William F. “Bill” Williams. Memorial services will be held at a later date. Cremation has been effected. A family inurnment will take place at Greenwood Cemetery. In lieu of flowers, the family has requested that memorials be made to the Greenwood County Hospital or to Greenwood County Home Health. Contributions may be sent in care of Koup Family Funeral Home, P. O. Box 595, Eureka, Kansas 67045, which is overseeing arrangements. Condolences may be left for the family online, at koupfunerals.com.

The family of Wayne Paul Williams created this Life Tributes page to make it easy to share your memories.