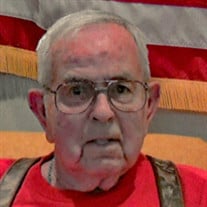 Wallace Lee “Wally” Scott of Eureka, Kansas, died on Friday, February 3, 2017 at Lakepoint El Dorado, in El Dorado, Kansas, at the age of 85. He was born on May 20, 1931, in rural Greenwood County, Kansas, the son of Ralph W. and Edith (Pugh) Scott. He was raised in Eureka and attended local schools, graduating with the Eureka High School Class of 1949. Following his graduation, Wally worked as a farmhand before joining the United States Navy, where he served during the Korean Conflict, with dignity and honor. Returning from service, Wally went to work in the oilpatch for a time, before beginning a career with the Greeley Gas Company in Eureka, where he worked for 34 ½ years until his retirement. On January 22, 1955, Wally was united in marriage to Bettie Joan Lacy in Eureka, Kansas. They made their home in Eureka. To this union two children were born. Wally was a member of VFW Post #2712. He is survived by his wife, Bettie; two sons: Jeffrey and wife, Rhonda Scott of Eureka; and Joe Scott of Eureka; three grandchildren; and five great-grandchildren. He was preceded in death by his parents, and one brother, Ralph “Buddy” Scott. Funeral services will be held at 2:00 P.M., Tuesday, February 7, 2017, at Koup Family Funeral Home, in Eureka with Pastor Stan Seymour of the First Christian Church of El Dorado officiating. Interment will follow at Greenwood Cemetery. Visitation hours are set from 5:00 P.M. to 7:00 P.M., Monday, at the funeral home. In lieu of flowers the family has requested that memorials be made to VFW Post #2712. Contributions may be sent in care of Koup Family Funeral Home, P.O. Box 595, Eureka, Kansas 67045, which is overseeing arrangements. Condolences may be left for the family online, at koupfunerals.com.

The family of Wallace Lee "Wally" Scott created this Life Tributes page to make it easy to share your memories.