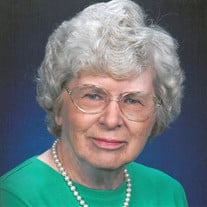 Virginia Ann Stanfield of Eureka, Kansas, died on Friday, October 14, 2016, at Greenwood County Hospital in Eureka, at the age of 82. Virginia was born October 13, 1934, in rural Greenwood County, Kansas, the daughter of John and Ethel Katherine (Birkett) Black. She was raised in the Reece area and attended Reece Grade school. She graduated with the Eureka High School class of 1952. She attended KU, graduating in 1956, with a bachelor’s degree in business. Following graduation, Virginia moved to Denver and worked at Texaco as a payroll accountant. On September 2, 1961, Virginia was united in marriage to Wade Adelbert Stanfield, in Eureka, Kansas. They made their home in Denver, Colorado, until 1979, when they moved to Benton, Kansas. Virginia retired in 1999, and following Wade’s retirement in 2000, they returned to the family farm near Reece, Kansas. She was a member of the Christian & Congregational Church, and the Greenwood County Hospital Auxiliary, Friends of the Library, The Red Hats, Eureka Bridge Club, and Eureka Book Club. She is survived by two sons: Cary Stanfield of Denver, Colorado; and Todd Stanfield of Benton, Kansas; five grandchildren; 1 great-grandchild; and one sister, Dorothy Black of Eureka, Kansas. Virginia was preceded in death by her parents; husband, Wade Stanfield; brother Harold Black; and one sister, Mary Symcox. Memorial services will be held at 11:00 A.M., Saturday, October 22, 2016, at Koup Family Funeral Home in Eureka, with Pastor Howard Bever of the Christian & Congregational Church, Eureka, officiating. Cremation has been effected. A private family scattering of ashes will take place at a later date. In lieu of flowers, the family has requested that memorials be made to the Susan B Allen Cancer Center of El Dorado. Contributions may be sent in care of Koup Family Funeral Home, P.O. Box 595, Eureka, KS 67045, which is in charge of service arrangements. Condolences may be left for the family online at koupfunerals.com.

Virginia Ann Stanfield of Eureka, Kansas, died on Friday, October 14, 2016, at Greenwood County Hospital in Eureka, at the age of 82. Virginia was born October 13, 1934, in rural Greenwood County, Kansas, the daughter of John and Ethel Katherine... View Obituary & Service Information

The family of Virginia Ann Stanfield created this Life Tributes page to make it easy to share your memories.

Send flowers to the Stanfield family.