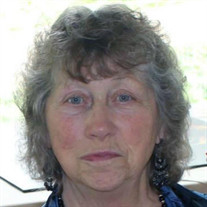 Virginia “Sue” Jones of Saint Joseph, Missouri, died on Thursday, December 9, 2021, at Mosaic Medical Center, in Saint Joseph, at the age of 77. She was born on August 7, 1944, in Piedmont, Kansas, the daughter of Clifford Milton and June Elizabeth (Wade) Bowen. She was raised in Piedmont and Welda, Kansas, moving there when she was 16. Later the family moved to Carrollton, Missouri where she attended local schools. In 1962, Sue was united in marriage to Earl Edward Standley. They made their home in Carrollton. To this union, three daughters were born. Earl preceded her in death in 1966. On December 23, 1967, Sue was united in marriage to Genie Lavere Jones in Carrollton, where they made their home. To this union, one daughter was born. The family later moved to Saint Joseph in 1969. Sue was a homemaker and cooked at many different places including her parent’s restaurant, fraternity houses, and for sports teams. She is survived by her children, Shirley and husband, Jeff Hare of Eureka, Kansas; Shiela Standley of Saint Joseph, Missouri; Rhonda Phillippe of Saint Joseph, Missouri; and Vicky and husband, Sidney Giffin of Saint Joseph, Missouri; nine grandchildren: David Aubuchon, Anthony Standley, Lori Jones, Steven Jones, Andrew Standley, Ashton Justiniano, Kendal Jackson, Melissa Hanson, and Chad Hare; 26 great-grandchildren; and six siblings: Wilma Wohler of Salina, Kansas; Jo Anne Unruh of Lawrence, Kansas; Cheryl Smoot of Carrollton, Missouri; Shirley Boulanger of Eureka, Kansas; Jim Bowen of Carrollton, Missouri; and Debbie McGuire of Las Vegas, Nevada. She was preceded in death by her parents, husbands, and one brother, Milton Bowen. Funeral services will be held at 2:00 P.M., Wednesday, December 15, 2021, at Koup Family Funeral Home, in Eureka with Pastor David Siler of the Neal United Methodist Church officiating. Interment will follow at Piedmont Cemetery. Visitation hours are set from 5:00 P.M. to 7:00 P.M., Tuesday, at the funeral home. In lieu of flowers, the family requests that memorial contributions be made to Susan G. Komen for the Cure. Contributions may be sent in care of Koup Family Funeral Home, PO Box 595, Eureka KS 67045, which is overseeing arrangements. Condolences may be left for the family online, at koupfunerals.com.

The family of Sue Jones created this Life Tributes page to make it easy to share your memories.

Send flowers to the Jones family.