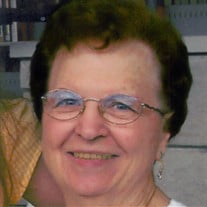 Viola Swisher Viola “Vi” (Butler) Swisher of Piedmont, KS, died on Tuesday, September 13, 2016, at Greenwood County Hospital in Eureka, at the age of 83. Vi was born February 11, 1933, the daughter of Ben and Ruth (Nuckols) Butler. She was raised in the Tonovay area, graduating from Tonovay High School. She enjoyed math, cheerleading, and basketball, and was an active member of the Bachelor Buttons 4-H Club, where she learned to become a perfectionist seamstress. On April 9, 1952, Vi was united in marriage to William Allen Swisher. They made their home in the Harmony area, near Piedmont. Vi was active in the Community Benefit Club (EHU), a 4-H supporter, and County Fair Superintendent, Red Cross Blood Drive, Election Boards and the Methodist Church. She enjoyed working at the local Sears Store for 18 years. When the Sears store closed, she worked at Eureka Carnegie Library for 13 years. When Vi retired in 2007, she enjoyed her family, friends, and grandkids; trips to Branson, Missouri and entering the County Fair. She is survived by her husband, Allen, of the home; son, Brian and wife, Margie Swisher of Independence, KS; daughter, Kelley and husband, Jeff Davidson of Eureka, KS; two granddaughters, Brianna (Swisher) and husband, Brian Berry of Scott City, KS; and Meghan (Davidson) and husband, Erik Loverude of Manhattan, KS; two grandsons, Russell and wife, Kali Swisher of Lake Wabaunsee, KS; and Grant Davidson of Hays, KS; one great-granddaughter, Hartley Lu Berry; one brother, Marvin Butler of Eureka, KS; and many nieces and nephews. She was preceded in death by her parents; four brothers, Bennie, Louis, Leo, and Raymond; three sisters, Alpha Hall, Winnie Rader, and Virginia Anderson; and one granddaughter. Funeral services will be held at 2:00 P.M., Thursday, September 15, 2016, at Koup Family Funeral Home with Pastor Larry Evans of the Neal Evangelical Free Church officiating. Interment will follow at Greenwood Cemetery. In lieu of flowers, the family has requested that memorials be made to the Eureka Public Library or to the Greenwood County 4-H Foundation. Contributions may be sent in care of Koup Family Funeral Home, P.O. Box 595, Eureka, KS 67045, which is in charge of service arrangements. Condolences may be left for the family online at koupfunerals.com.

The family of Viola Marie "Vi" Swisher created this Life Tributes page to make it easy to share your memories.

Send flowers to the Swisher family.