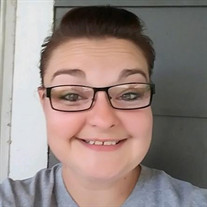 Tisha Rae Gravatt of Eureka, died on Wednesday, May 1, 2019 at Ascension Via Christi – St. Francis Hospital in Wichita, at the age of 34. She was born on October 19, 1984, in Imperial, Nebraska, the daughter of Michael Louie and Anita Rae (Drake) Mullins. She was raised in Sterling, Colorado attending local schools. The family moved to Eureka in 2000. She graduated from Eureka Junior Senior High School with the Class of 2003. On July 5, 2003, Tisha was united in marriage to Kevin Micheal Gravatt in Florence. They made their home in Eureka. To this union, two children were born. Tisha worked for the Eureka Herald, the Greenwood County Sheriff’s Department, Eastside Service, Eureka Pharmacy, and for awhile operated Angel Kisses Day Care. She is survived by her husband, Kevin of the home; their children, Rylee and Paiton Gravatt; parents, Mike Mullins of Sterling, Colorado; and Anita Mullins-Miller of Augusta; siblings, Jesse Mullins of Eureka; and Kacy Smalley of El Dorado; maternal grandmother, Janice Howard of El Dorado; parents-in-law, Lloyd and Beverly Gravatt of Eureka; and numerous nieces and nephews. Memorial services will be held at 2:00 P.M., Tuesday, May 7, 2019 at the Matt Samuels Community Building in Eureka with Pastor Larry Evans of the Neal Evangelical Free Church officiating. Cremation has been effected. A private family scattering will take place at a later date. In lieu of flowers, the family has requested that memorials be made to the Tisha Gravatt Memorial Fund or to the Cancer Center of Kansas. Contributions may be sent in care of Koup Family Funeral Home, P.O. Box 595, Eureka, KS 67045, which is overseeing arrangements. Condolences may be left for the family online, at koupfunerals.com.

Tisha Rae Gravatt of Eureka, died on Wednesday, May 1, 2019 at Ascension Via Christi &#8211; St. Francis Hospital in Wichita, at the age of 34. She was born on October 19, 1984, in Imperial, Nebraska, the daughter of Michael Louie and Anita... View Obituary & Service Information

The family of Tisha Rae Gravatt created this Life Tributes page to make it easy to share your memories.

Send flowers to the Gravatt family.