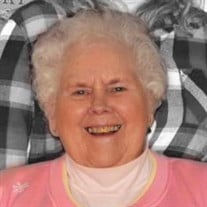 Thresa M. Ehrhart Thresa Mary Ehrhart, formerly of Kansas City, Kansas, died on Wednesday, December 9, 2020, at Eureka Nursing Center in Eureka, Kansas, at the age of 84. She was born on February 22, 1936, in rural Woodson County, Kansas, the daughter of John and Frances (Sicka) Hoag. She was raised in rural Yates Center and attended the Yates Center High School, graduating with the class of 1954. After high school, she traveled first to Maine and then to Topeka, Kansas, where she began working in the office at Butner’s IGA and met Terry Ehrhart. On May 28, 1960, Thresa was united in marriage to Terry M. Ehrhart in Yates Center, Kansas. They made their home in Kansas City, Kansas, where they raised a family. She was a member of the St. Patrick Catholic Church of Kansas City, Kansas, the Altar Society, and Our Lady of Perpetual Help Circle. She is survived by her husband, Terry; one daughter, Sheila and husband Jayme Koup of Eureka, Kansas; two sons, Michael Ehrhart of Wichita; and Kelly and wife, Crysta Ehrhart of Gladstone, Missouri; four grandchildren, Matthew and wife, Trystan Thompson of Eureka; Meghan Ehrhart of Wichita; Jennifer and husband, Jason Gray of Olathe; and Kodi and husband Mathew Alford of Olathe; five great-grandchildren and one on the way; two brothers, Gilbert and wife, Rita Hoag of Bonner Springs, Kansas; and Jim and wife, Ronica Hoag of Toronto, Kansas; and one sister, Rosie and husband, Ralph Steinbacher of Bonner Springs, Kansas. She was preceded in death by her parents; three brothers, Robert, Eugene, and Louis Hoag; and two sisters, Barbara Roberts and Helen Hobbs. A private family funeral Mass will be held at Sacred Heart Catholic Church in Eureka with Father Dominic Potnuru officiating. Interment will follow at the Greenwood Cemetery, Eureka. In lieu of flowers, the family requests that memorials be made to the Alzheimer’s Association. Contributions may be sent in care of Koup Family Funeral Home P.O. Box 595, Eureka, KS, 67045, which is overseeing arrangements. Condolences may be left for the family online, at koupfunerals.com

The family of Thresa Mary Ehrhart created this Life Tributes page to make it easy to share your memories.

Send flowers to the Ehrhart family.