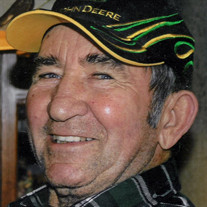 Thomas Jordan Williams of Eureka, died on Sunday, November 26, 2017, at Via Christi Hospital St. Francis, in Wichita, at the age of 83. He was born on February 2, 1934, in Hartville, Missouri, the son of Chesa Dick “Chet” and Thelma Jane (Davison) Williams. The family moved to Eureka when TJ was very young, and he was raised in Eureka, graduating from local schools. On November 21, 1954, TJ was united in marriage to Vee Loraine Unruh in Madison. To this union three children were born. TJ joined the United States Army in 1954 and was trained as a mechanic, serving in Germany. After his discharge, the family lived in Emporia, El Dorado, McPherson, Wichita, and Valley Center. TJ owned the Texaco station in Eureka and in Severy. He later began working for Derby Pipeline. After his retirement, he began ranching and raising Angus. Vee preceded him in death on June 7, 1998. He was a member of Sacred Heart Catholic Church. He is survived by three children, Larry Dean Williams of Wichita; Gary Lee Williams of Eureka; and Terrie Denise Ticer of Sante Fe, New Mexico; six grandchildren; ten great-grandchildren; three siblings, Ulala Prewit of El Dorado, Kansas; Jim Williams of Eureka; and Dickie Williams of Albuquerque, New Mexico; and his sweetheart of thirteen years, Esther Lewis. He was preceded in death by his parents; wife; sister, Kathy Booth; and brother, Paul Williams. Funeral mass will be held at 10:30 A.M., Friday, December 1, 2017 at Sacred Heart Catholic Church in Eureka with Father Steve Gronert officiating. Interment will follow at Greenwood Cemetery. Visitation hours are set from 5:00 P.M. to 6:30 P.M., Thursday at the church. Rosary recitation will follow. In lieu of flowers, the family has requested that memorials be made to Sacred Heart Catholic Church. Contributions may be sent in care of Koup Family Funeral Home, P.O. Box 595, Eureka, KS 67045, which is overseeing arrangements. Condolences may be left for the family online, at koupfunerals.com.

The family of TJ Williams created this Life Tributes page to make it easy to share your memories.