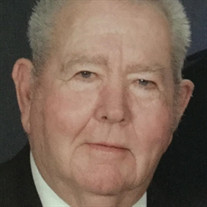 Terry Joseph Reilly of Hamilton, died on Friday, April 26, 2019 in Eureka, at the age of 77. He was born on June 28, 1941, in Topeka, the oldest child of John and Florence (Umscheid) Reilly. When Terry was about three years of age the family moved to Sioux City, Iowa with John’s work as an oil gauger. When Terry was in the fifth grade the family moved to Eureka, Kansas. He attended Sacred Heart Catholic School through the eighth grade and completed his education at Eureka High School with the Class of 1960. He later attended Washburn University and enlisted in the United States Air Force. He was stationed at Nellis Air Force Base in Las Vegas, Nevada. As a munition’s specialist, he was deployed to Florida during the Cuban Missile Crisis. Terry returned to Nellis AFB and spent his off-duty hours working as an attendant at the Texaco in downtown Las Vegas. This is where he met his future bride, Kathryn Laub. Terry and Kathryn were united in marriage on October 12, 1963, at Sacred Heart Catholic Church in Eureka. They made their home west of Madison and in 1976, moved to their farm west of Hamilton. He worked for his father farming, ranching, hauling, and heating oil for the Reilly Oil Company and at the same time operated his own farm and oil business. In the late 1980’s, he gained employment with Jackson Brothers as an oilfield pumper. He retired in 2016. He was a parishioner of St. John’s Catholic Church in Hamilton, and a lifetime member of the Knights of Columbus. He is survived by his wife of 55 years, Kathryn Reilly of the home; their three children, Shawn and wife, Brandie Reilly of Kermit, Texas; Corey and wife, Amy Reilly of Emporia; and Carrie and husband, Brian Moore of Lincoln, California; four grandchildren; one great-grandchild; and his brother Timothy and wife, Gina Reilly of Emporia. He was preceded in death by his parents and a son, James Patrick Reilly. Memorial Mass will be held at 10:30 A.M., Thursday, May 2, 2019 at Sacred Heart Catholic Church in Eureka with Father Stephen Gronert officiating. Rosary recitation will begin at 10:00 A.M. Inurnment will follow at Greenwood Cemetery, Eureka. In lieu of flowers, the family has requested that memorials be made to Saint John’s Catholic Church Altar Society. Contributions may be sent in care of Koup Family Funeral Home, P.O. Box 595, Eureka, KS 67045, which is overseeing arrangements. Condolences may be left for the family online, at koupfunerals.com.

Terry Joseph Reilly of Hamilton, died on Friday, April 26, 2019 in Eureka, at the age of 77. He was born on June 28, 1941, in Topeka, the oldest child of John and Florence (Umscheid) Reilly. When Terry was about three years of age the family... View Obituary & Service Information

The family of Terry Joseph Reilly created this Life Tributes page to make it easy to share your memories.

Send flowers to the Reilly family.