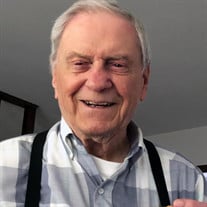 Terry Michael Ehrhart, formerly of Kansas City, Kansas died on Wednesday, September 15, 2021, at his home in Eureka, at the age of 89. He was born on November 30, 1931, in Topeka, the son of Cornelius “Connie” and Alice (Coughlin) Ehrhart. He was raised in Topeka and attended Hayden Catholic High School, graduating with the class of 1949. During high school and after he worked for a florist at a local greenhouse before taking a job at the Santa Fe Supply Depot. He enlisted in the U.S. Air Force serving during the Korean Conflict and was honorably discharged. After serving his country Terry worked various jobs in the Topeka area, including Butner’s IGA where he met his future wife Thresa, before going to work for the Federal Aviation Administration where he would work until he retired in 1986. On May 28, 1960, Terry was united in marriage to Thresa M. Hoag in Yates Center. They made their home in Kansas City, Kansas where they raised a family. He was a member of the St. Patrick Catholic Church of Kansas City, Kansas; the Knights of Columbus; and the Sacred Heart Catholic Church of Eureka. After retirement, Terry spent his time with Thresa while they helped care for their grandson Matt. In addition, he devoted countless hours to volunteer service at Providence Health Center as well as St. Patrick Catholic Church. Terry is survived by one daughter, Sheila and husband, Jayme Koup of Eureka; two sons, Michael “Mick” Ehrhart of Wichita; Kelly and wife, Crysta Ehrhart of Gladstone, Missouri; four grandchildren: Matthew and wife, Trystan Thompson of Eureka; Meghan Ehrhart of Wichita; Jennifer and husband, Jason Gray of Olathe; and Kodi and husband, Mathew Alford of Spring Hill; six great-grandchildren; and one sister, Mary Ann Mark of Topeka. He was preceded in death by his wife and his parents. A private family Mass of Christian Burial will be held at the Sacred Heart Catholic Church in Eureka, with Father Nicholaus Jurgensmeyer officiating. Interment will follow at Greenwood Cemetery, Eureka. In lieu of flowers, the family requests that memorials be made to Boys Town. Contributions may be sent in care of Koup Family Funeral Home, P. O. Box 595, Eureka, KS 67045, which is overseeing arrangements. Condolences may be left for the family online at koupfunerals.com.

The family of Terry Michael Ehrhart created this Life Tributes page to make it easy to share your memories.

Send flowers to the Ehrhart family.