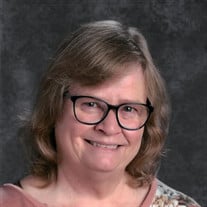 Terry Lynn Denner of Eureka, died on Sunday, September 12, 2021, at Greenwood County Hospital, in Eureka, at the age of 65. She was born on April 19, 1956, in Jackson County, Missouri, the daughter of Helen Louise (Justice) Sanders. She was raised in Merriam, and attended local schools, graduating from Wyandotte High School with the Class of ’74. Following graduation, Terry attended beauty school, then managed a beauty salon for several years. On July 16, 1974, she was united in marriage to Thomas P. Denner in Eureka. To this union two sons were born. The family moved to Kansas City in 1976 where they lived until 1989 when they returned to Eureka. She went to work in El Dorado, KS at the Food Barn and then at Thriftway in Eureka in the delicatessen. In 1998, Terry went to work at Eureka High School as a Paraprofessional. She was a loving wife, mother, devoted grandmother, and friend to all. She was a member of the Christian Church. Terry is survived by her husband, Tom of the home; two sons: Jason W., and wife Emma, of Bentonville, Arkansas; and Matthew T. and wife, Julie Denner of Overland Park, Kansas; three grandchildren: Ramsey Jayne, Quincy Paske, and Delaney Boone Denner; a sister, Cherlyn Howard of Warsaw, Missouri; and one nephew, David Howard. She was preceded in death by her mother. Memorial services will be held at 11:00 A.M., Friday, October 15, 2021, at Greenwood Cemetery, Eureka with Pastor Deron Johnson of the First Baptist Church of Silver Lake officiating. The family prefers masks to be worn. Cremation has been effected. In lieu of flowers, the family requests that memorials be made to EHS - Terry Denner Memorial Scholarship. Contributions may be sent in care of Koup Family Funeral Home, PO Box 595, Eureka KS 67045, which is overseeing arrangements. Condolences may be left for the family online, at koupfunerals.com.

Terry Lynn Denner of Eureka, died on Sunday, September 12, 2021, at Greenwood County Hospital, in Eureka, at the age of 65. She was born on April 19, 1956, in Jackson County, Missouri, the daughter of Helen Louise (Justice) Sanders. She was... View Obituary & Service Information

The family of Terry Lynn Denner created this Life Tributes page to make it easy to share your memories.

Send flowers to the Denner family.