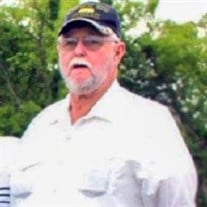 Teddy Lyn Postlethwait passed away Sunday, February 20, 2022, at his home near Eureka, at the age of 74. Ted was born May 20, 1947, in Eureka, the son of Linslye E. and Tempa G. (Hartley) Postlethwait. He was raised in Eureka and graduated from Eureka High School in 1965. He was in the band throughout his school years. In 1967, Ted was united in marriage to Carol MaeBeth Becker and to this union, a daughter, Beth Ann Postlethwait was born. In 1973, Ted moved his family to Bartlesville, Oklahoma where he worked as an appliance technician. They lived there until returning to Eureka in 1976. Ted worked various jobs over the years including Road and Bridge construction in Halstead and Newton where he ran heavy equipment. He also worked at A.C. Houston Lumber Company, and Williams Oil (which is now 54 Tire), and Nixon Dairy Farm; the water plant for the City of Eureka, and as caretaker at Eureka City Lake, a position he held for over seven years. After 15 years of marriage, he and MaeBeth divorced. A few years later Ted met Dolores “Dee” Wiggins and they became lifetime partners. Ted was working construction in Wamego, Kansas and in Nebraska for Mike Frakes, his longtime friend. Ted is survived by his lifetime partner, Dee Wiggins of the home; daughter, Beth Ann Postlethwait; granddaughter, Shelby and husband, Tony Kordupel; great-granddaughter, Makayla Ann Kordupel, all of Eureka; sister, Margie and husband, Barry Brown; two nieces: Kim and husband, Shane Kastning, and Kelley and husband, Doug Hall; three great-nephews: Delton and wife, Mackenzie Hall; Dawson Hall; and Shawn and wife, Brooke Kastning; great-niece, Kaylee Kastning; three great-great nieces: Drew Hall, and Brinley, and Saylor Kastning, all of Amarillo, Texas; two step-children: Camie and husband, Marlin Beitz, and Travis Wiggins of Eureka; eleven step-grandchildren; and sixteen step great-grandchildren. Ted loved hunting. He hunted duck, turkey, prairie chicken and good ol’ coyote. Fishing was his other passion. He handed his knowledge of fishing and hunting down through the generations. Ted will be remembered for his selfless nature – helping wherever he could, whenever someone was in need. He always seemed to know how to make people laugh. He will be missed greatly. The family would like to invite friends and family to join them for the “Celebration of Ted’s Life” at 2:00 P.M., Sunday, March 6, 2022, at Phillip’s Cabin, Eureka Lake. Please bring a covered dish; smoked pork will be provided. Bring your memories and stories to share with everyone about Ted. We look forward to good food and good time with family and friends sharing happy stories of a man who will be greatly missed. That is what Ted would want. In lieu of flowers, the family requests that memorials be made to the Teddy Postlethwait Memorial Fund. Contributions may be sent in care of Koup Family Funeral Home, P.O. Box 595, Eureka, Kansas, 67045, which is overseeing arrangements. Condolences may be left for the family online at koupfunerals.com.

Teddy Lyn Postlethwait passed away Sunday, February 20, 2022, at his home near Eureka, at the age of 74. Ted was born May 20, 1947, in Eureka, the son of Linslye E. and Tempa G. (Hartley) Postlethwait. He was raised in Eureka and graduated... View Obituary & Service Information

The family of Teddy Lyn Postlethwait created this Life Tributes page to make it easy to share your memories.

Send flowers to the Postlethwait family.