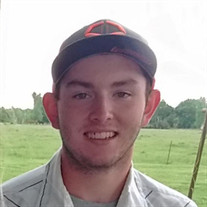 Tanner Wesley McMullen Tanner Wesley McMullen of Fall River, Kansas, entered heaven’s gates on Monday, February 27, 2017, at the age of 17. He was born September 19, 1999, at Susan B. Allen Memorial Hospital in El Dorado, the son of Terry Dean and Jacquetta Kay (Zane) McMullen. He was raised in the Fall River area and attended Marshall Elementary and Eureka Junior Senior High School, in Eureka. Tanner was also attending Flint Hills Technical College to pursue a career in Computerized Machine Tooling after high school. Tanner touched many lives. He was an avid fisherman and loved spending his time outdoors. Tanner was very active in baseball year-round. He was full of life and lived every moment to the fullest. His humor was unforgettable and he left his mark on every person he met. He is survived by his mother and father, Jacquetta and Terry McMullen of Fall River; sister, Shelby and husband, Cody Jones of Wichita; paternal grandmother, Diana McMullen of Eureka; and numerous aunts, uncles, and cousins. Tanner was preceded in death by paternal grandfather, Dean McMullen; and maternal grandparents, Squire “Boone” and Bernadine Zane. Funeral services will be held at 3:00 P.M., Saturday, March 4, 2017 at the Lions Park Baseball Diamond, in Eureka with Pastor John Craighead of the Jefferson Street Baptist Church officiating. Interment will follow at Greenwood Cemetery. The family will receive relatives and friends at the Matt Samuels Community Building in Eureka following interment. Visitation hours are set from 6:00 P.M. to 8:00 P.M., Friday, at the funeral home. In lieu of flowers, the family has requested that memorials be made to Tanner McMullen Memorial Fund. Contributions may be sent to Community National Bank, c\o Rita Cornett, 401 N. Main St., Eureka, KS 67045. Funeral arrangements are being handled by Koup Family Funeral Home in Eureka. Condolences may be left for the family online, at koupfunerals.com.

The family of Tanner Wesley McMullen created this Life Tributes page to make it easy to share your memories.

Send flowers to the McMullen family.