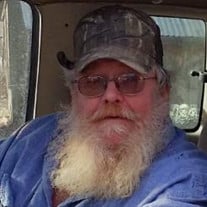 Steven James “Red” Ledgerwood of Eureka, died at his home in Eureka on January 15, 2019, at the age of 61. He was born November 12, 1957 in Pratt, Kansas. He lived most of his life in Eureka where he worked at the concrete company, and as a self-employed contractor. On December 27, 1985, Steven was united in marriage to Sharon Lee Hurt in Wichita. Together they raised two children. Sharon preceded him in death on December 27, 2013. Steven is survived by his son, Johnathon Ledgerwood of Malvern, Arkansas; daughter, Kristle and husband, Jamey Gudde, Sr. of Chouteau, Oklahoma; six grandchildren: Cherokee, Jamey Jr., Cheyenne, Checotah, Crystal, and Cassady Gudde; sister, Marilyn Zimmerman of Wichita; brother, Terry Ledgerwood of Newton; step-siblings: Raymond Spedding of Miami, FL; Debbie Hardman of Wichita; Charles Spedding of Wichita; and Shawn Spedding of Kansas City, MO. He was preceded in death by his parents, and wife, Sharon. Memorial services are set for 2:00 P.M., Saturday, February 2, 2019, at Koup Family Funeral Home in Eureka. Online condolences may be left for the family at koupfunerals.com.

The family of Steven James "Red" Ledgerwood created this Life Tributes page to make it easy to share your memories.

Steven James “Red” Ledgerwood of Eureka, died at his home in...

Send flowers to the Ledgerwood family.