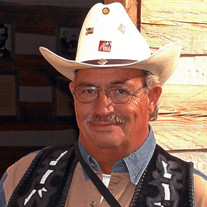 Stanley Louis McDaniel of Climax, died at his home, Sunday, August 2, 2020, at the age of 74. He was born January 16, 1946, in Wichita, Kansas, the son of Louis Henry and Virginia Faye (Moyer) McDaniel. He was raised in Maize and attended local schools, graduating from Maize High School with the Class of 1964. He was drafted into the United States Army in June 1968. He ended up making it his profession, retiring from the military in June 1992. He lived in New Jersey from 1992-1999 then returned to Kansas, settling in Climax. Of his marriages, four children were born. He remarried Frances Marie Johnson-McDaniel on June 8, 2002 in Climax. He worked at Flint Hills Feed and Supply in Eureka for many years. He also worked for the Kansas Department of Wildlife, Parks, and Tourism at Fall River and read water meters for Rural Water District 1. He was baptized a member of the Climax United Methodist Church on July 29, 2001. He was also a member of the Climax Masonic Lodge #411, the Eureka and Toronto chapters of the American Legion, the Climax City Council, and served as the Climax City Treasurer, and on the board of Rural Water District 1. Stan is survived by his wife, Fran of the home; four children, Micaela and husband, Shawn Darnall of Wichita; Tanya and husband, Christian Jung of Mainz, Germany; Manuel McDaniel of Mainz, Germany; and Andy McDaniel of Mainz, Germany; four grandchildren; four great-grandchildren; and five siblings: David McDaniel of Haysville; Cynthia and husband, Charles Sturgill of Marion, Virginia; Max and wife, Karen McDaniel of Haysville; Mary Ketcher of Denton, Texas; and Loretta Ray of Springfield, Missouri. He was preceded in death by his parents. A celebration of life and scattering will take place at a later date. Cremation has been effected. The family requests no flowers be sent. Memorials contributions may be made to the Climax United Methodist Church. Contributions may be sent in care of Koup Family Funeral Home, P.O. Box 595, Eureka, KS 67045, which is overseeing arrangements. Condolences may be left for the family online, at koupfunerals.com.

Stanley Louis McDaniel of Climax, died at his home, Sunday, August 2, 2020, at the age of 74. He was born January 16, 1946, in Wichita, Kansas, the son of Louis Henry and Virginia Faye (Moyer) McDaniel. He was raised in Maize and attended... View Obituary & Service Information

The family of Stanley Louis McDaniel created this Life Tributes page to make it easy to share your memories.

Send flowers to the McDaniel family.