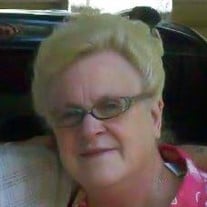 Sondra Sue Baugher of Eureka, died on Thursday, April 21, 2022, at the Eureka Nursing Center, in Eureka, at the age of 80. She was born on January 31, 1942, in Scipio, Kansas, the daughter of Leonard and Bernice (Kueser) Spears. Her mother died when she was four and she was raised by her mother’s sister and husband, Ethel & Fred Showalter. Sondra was raised in Garnett and spent nearly her entire life there. She graduated from Ursula Academy in Paola. In 1963, Sondra was united in marriage to Herbert Warren Olson. To this union, one son was born. This marriage later ended in divorce. On September 20, 1985, she was united in marriage to Kenneth W. “Mick” Baugher in Miami, Oklahoma. They made their home in Garnett. For several years, they owned and operated Susie’s Bakery in Garnett until the mid-90s. Mick preceded her in death on February 25, 1998. She was a home health aid around Garnett until her health forced her to retire in 2020. She then moved to Neal to be closer to family. Sondra was a member of the Oatville Community Church near Wichita. She is survived by two sons, Warren Lee and wife, Beth Olson of Neal; and Stephen Lowery of Garnett; seven grandchildren; and numerous great-grandchildren. She was preceded in death by her parents; husband, Mick; two grandsons, Joseph Warren Olson and Eric Richard Olson; and brother, Larry Spears. Memorial services will be held at a later date in Garnett. Cremation has been effected. Inurnment will follow at a later date at Holy Angels Cemetery, Garnett. In lieu of flowers, the family requests that memorials be made to Koup Family Funeral Home, to assist with expenses. Contributions may be sent in care of Koup Family Funeral Home, PO Box 595, Eureka KS 67045, which is overseeing arrangements. Condolences may be left for the family online, at koupfunerals.com.

Sondra Sue Baugher of Eureka, died on Thursday, April 21, 2022, at the Eureka Nursing Center, in Eureka, at the age of 80. She was born on January 31, 1942, in Scipio, Kansas, the daughter of Leonard and Bernice (Kueser) Spears. Her mother... View Obituary & Service Information

The family of Sondra Sue Baugher created this Life Tributes page to make it easy to share your memories.

Send flowers to the Baugher family.