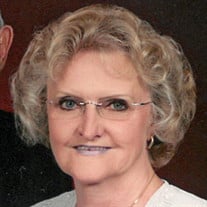 Shirley Fay Sprague of Eureka, died on Friday, January 22, 2021, at Greenwood County Hospital in Eureka, at the age of 85. She was born November 5, 1935, in Wonsevu, Kansas, the daughter of William James and Ruth Elizabeth (Nicholson) Thompson. She attended Wonsevu Grade School and then Cedar Point High School, from which she graduated. Following graduation, Shirley moved to Eureka to live with her sister and began working at Mildred’s Café, where she stayed until she was married. On June 1, 1957, Shirley was united in marriage to William Eugene “Gene” Sprague in Eureka. They made their home in Eureka, where they raised their son. Shirley went to work for C. C. Whittaker, attorney, as a secretary; then began working at Zenishek’s – first as a gift wrapper- working her way up to bookkeeper. She then began her career at Home Bank & Trust. She began in bookkeeping, and advanced to the position of Vice President, retiring after 31 ½ years. Upon retirement, Shirley and Gene did a complete remodel of their home, and took many vacations with their family, and dear friends Bee & Jo Davidson. Shirley is survived by her husband, Gene, of the home; son, Gary Sprague of Wichita; two granddaughters: Rebecca and husband, Michael Gangle of Kansas City, Kansas; and Stefanie and husband, Christopher Taylor of Chanute; and four great-grandchildren: Bradley, Emily, Cayden, and Ava. She was preceded in death by her parents; great-granddaughter, Graceland; sister, Beth Edith (Thompson) Wright; and brother, Dean William Thompson. A memorial service will be held at a later date, due to the pandemic. Cremation has been effected. In lieu of flowers, the family has requested that memorials be made to the Christian & Congregational Church or to the Kansas Humane Society. Contributions may be sent in care of Koup Family Funeral Home, P.O. Box 595, Eureka, Kansas 67045, which is handling arrangements.

Shirley Fay Sprague of Eureka, died on Friday, January 22, 2021, at Greenwood County Hospital in Eureka, at the age of 85. She was born November 5, 1935, in Wonsevu, Kansas, the daughter of William James and Ruth Elizabeth (Nicholson) Thompson.... View Obituary & Service Information

The family of Shirley Fay Sprague created this Life Tributes page to make it easy to share your memories.

Send flowers to the Sprague family.