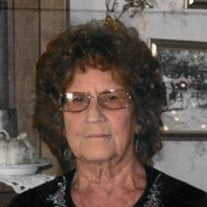 Shirley Juanita Gulick of Eureka, died on Sunday, November 7, 2021, at the Eureka Nursing Center, in Eureka, at the age of 86. She was born on December 30, 1934, in Belle Plaine, the daughter of Albert Lewis and Ollie Euceba (Scott) McMillian. She was raised in Greenwood County and attended schools at Eureka and Hamilton. On September 7, 1951, Shirley was united in marriage to Loren Eugene Gulick in Eureka. They made their home in various places throughout the county, eventually settling in Toronto. To this union, seven children were born. Shirley worked hard to raise her children, cooking every meal at home to try to keep them all fed. She loved tending her flower gardens and landscaping. She made ceramics often and always made a gingerbread cake at Christmastime, sometimes for public display. After the children were grown, Shirley returned to school and received nutritionist training at Wichita Technical College. She later worked at Greenwood County Hospital, first in the kitchen, then as a nutritionist and finally in medical records. She retired in the early 2000’s. Loren preceded her in death on October 15, 2011. She was a member of the Greenwood County Hospital Auxiliary. She is survived by six children: Ron, Tim, Cotton, Chop, and Albert all of Eureka; and Cindy McCoy of Neal; eighteen grandchildren; thirty-four great-grandchildren; one great-great-grandchild; and three siblings: Sheila Reif of Columbus; Larry McMillian of Pretty Prairie; and Jerry McMillian of Grand Lake, Oklahoma. She was preceded in death by her parents; husband; daughter, Vicky Jo Meadows; two grandchildren, Jason Kelley Meadows and Tiffany Gulick; and two brothers, William Albert “Bud” McMillian and Jack Lewis McMillian, Sr. Funeral services will be held at 10:00 A.M., Saturday, November 13, 2021, at Koup Family Funeral Home, in Eureka with Pastor Kevin Lawrence of the Climax United Methodist Church officiating. Interment will follow at Toronto Cemetery, Toronto. Visitation hours are set from 5:00 P.M. to 7:00 P.M., Friday, at the funeral home. In lieu of flowers, the family requests that memorials be made to Good Shepherd Hospice or to the Greenwood County Hospital Auxiliary. Contributions may be sent in care of Koup Family Funeral Home, PO Box 595, Eureka KS 67045, which is overseeing arrangements. Condolences may be left for the family online, at koupfunerals.com.

Shirley Juanita Gulick of Eureka, died on Sunday, November 7, 2021, at the Eureka Nursing Center, in Eureka, at the age of 86. She was born on December 30, 1934, in Belle Plaine, the daughter of Albert Lewis and Ollie Euceba (Scott) McMillian.... View Obituary & Service Information

The family of Shirley Juanita Gulick created this Life Tributes page to make it easy to share your memories.

Send flowers to the Gulick family.