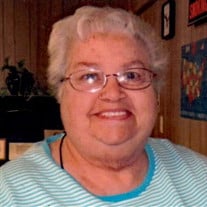 Shirley Mae Brandon, formerly of Chanute, KS, died Monday, March 20, 2017, at Eureka Nursing Center in Eureka, KS, at the age of 81. Shirley was born March 22, 1935, in Chanute, KS, the daughter of Wayne James and Ruby Erma (McDowell) Brandon. She was raised in the Chanute area and attended local schools, before graduating from Colony High School. Shirley was co-owner and bookkeeper on the family machine shop in Little River, KS. Later she attended Hutchinson Community College, earning an Associates Degree in Business. After her retirement, she cared for her mother in Chanute for an extended period of time. She later moved to Toronto from Chanute to be closer to her daughter when her own health began to fail. She was a member of the Church of the Brethren in Chanute, KS. Shirley is survived by three children: Debra Jean McLean of Toronto, KS; David Alan Denman of Toronto, KS; and Diann Kay Call of Haysville, KS; eight grandchildren; four great-grandchildren; one great-great grandson; two sisters: Barbara Meador of Raytown, MO; and Lora Jean Jeffers of Bartlesville, OK; and three brothers: Dallas Wayne Brandon of Kansas City, KS; James Dean Brandon of Grand Lake, OK; and Spencer Bandon of Chanute, KS. Inurnment will take place at Buckeye Cemetery, Kanopolis, Kansas. A memorial service will take place at a later date. Condolences for the family may be left online at koupfunerals.com, which is overseeing arrangements.

The family of Shirley Mae Brandon created this Life Tributes page to make it easy to share your memories.

Send flowers to the Brandon family.