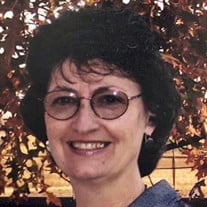 Sharon Kay Beeman of Hamilton, died Friday, April 5, 2019, at Greenwood County Hospital in Eureka, at the age of 70. She was born February 19, 1949, in Eureka, Kansas the daughter of James and Opal (Megli) Griffith. She was raised in Neal, attending the Neal, Tribune, Hamilton and Eureka schools, graduating from Eureka High School. She was proud to be on a successful softball team while attending Tribune school. On September 8, 1967, Sharon was united in marriage to James Charles Beeman. The couple made their home in Hamilton where she was a homemaker. To this union, two sons were born. Once the boys were in junior high, Sharon went to work at the Hamilton Post Office and the Neal Post Office, and later for Home Bank & Trust, before starting her career at Greenwood County Road and Bridge where she was the office manager. She retired in March of 2014. Jim preceded her in death on March 17, 2014. She was a member of the Hamilton United Methodist Church, the Friends Lunch Club, Embroidery Club, Greenwood County Cattlewomen, and was Co-Founder of the Willow Valley GoGetters 4-H Club (Hamilton). She is survived by her sons: Preston and wife, Jeanna Beeman of Hamilton; and Bruce and wife, Stefanie Beeman of Moline; five grandchildren: Reid Beeman, Tessa Beeman, Katy Beeman, Avery Beeman, and Jorja Beeman; five siblings: James Griffith of Bellingham, Washington; Leo Griffith of North Newton, Kansas; Robert Griffith of Scottsbluff, NE; Richard Griffith of Topeka, KS; and MaryAnn Thornton of Eureka KS. She was preceded in death by her parents; husband, Jim; and siblings: Hazel Herold, Ruby Herman, Edgar Griffith, Dorothy Gutman, Keith Griffith, and Gerald Griffith. Funeral services will be held at 2:00 P.M., Wednesday, April 10, 2019 at Koup Family Funeral Home, in Eureka with Pastor Warren Olson officiating. Interment will follow at Greenwood Cemetery. Visitation hours are set from 6:00 P.M. to 8:00 P.M, Tuesday, at the funeral home. In lieu of flowers, the family has requested that memorials be made to the Hamilton City Library or to the Greenwood County 4-H Foundation. Contributions may be sent in care of Koup Family Funeral Home, P.O. Box 595, Eureka, KS 67045, which is overseeing arrangements. Condolences may be left for the family online at koupfunerals.com.

Sharon Kay Beeman of Hamilton, died Friday, April 5, 2019, at Greenwood County Hospital in Eureka, at the age of 70. She was born February 19, 1949, in Eureka, Kansas the daughter of James and Opal (Megli) Griffith. She was raised in Neal,... View Obituary & Service Information

The family of Sharon Kay Beeman created this Life Tributes page to make it easy to share your memories.

Send flowers to the Beeman family.