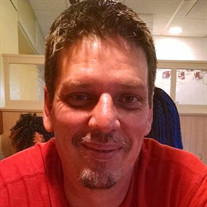 Sean Mitchell Claytor of Towanda, formerly of Eureka, died on Saturday, July 9, 2016 at Via Christi – Saint Francis Medical Center, in Wichita, at the age of 46. Sean was born on October 9, 1969, in Wellington, the son of Richard and Bertha (Wilson) Claytor. He was raised in Longton and Goddard and graduated from Goddard High School with the Class of 1988. He later lived in Eureka and worked at Medicalodge\Eureka Nursing Center, Gran Villas, and Casey’s. On May 16, 2013, he was united in marriage to Angela (Wickham) Brown in Eureka. They made their home in Eureka, and later moved to Towanda. He worked at Wheat State Manor at the time of his death. He was a member of the Expedition Club on Facebook. He is survived by his wife, Angela of the home; nine children: Amber Henry of Wichita; Kayla Dickey of Herington; Tanya Henry of Eureka; Angie Madden of Sterling; Sean Richard Claytor of Eureka; Cameron Claytor of Towanda; Cody Claytor of Eureka; Jerry Claytor of Eureka; and Ryan Brown of Towanda; and numerous grandchildren; father, Richard Claytor of Longton; three siblings, Mark Claytor of Arkansas City; Deanna Claytor of Wichita; and Jennifer McMillan of Chanute; and four step-siblings, Bud Kill of Longton; Robert Kill of Longton; Stephanie Henning of Longton; and Richard Kill of Sycamore. He was preceded in death by his mother, and step-mother, Kay Claytor. Graveside services will be held at 3:00 P.M., Thursday, July 14, 2016 at Greenwood Cemetery with Pastor Jody Anderson officiating. Visitations hours are set from 5:00 P.M. to 7:00 P.M., Wednesday, at the funeral home. In lieu of flowers, memorials may be made to the Sean Claytor Memorial Fund. Contributions may be sent in care of Koup Family Funeral Home, P.O. Box 595, Eureka, KS 67045, which is in charge of service arrangements. Condolences may be left for the family online at koupfunerals.com.

Sean Mitchell Claytor of Towanda, formerly of Eureka, died on Saturday, July 9, 2016 at Via Christi &#8211; Saint Francis Medical Center, in Wichita, at the age of 46. Sean was born on October 9, 1969, in Wellington, the son of Richard and... View Obituary & Service Information

The family of Sean Mitchell Claytor created this Life Tributes page to make it easy to share your memories.

Sean Mitchell Claytor of Towanda, formerly of Eureka, died on...

Send flowers to the Claytor family.