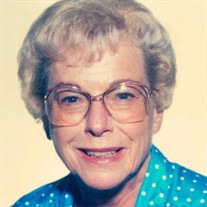 Ruby Maye Foster of Eureka passed away Sunday, September 8, 2019, at Eureka Nursing Center in Eureka, at the age of 98. She was born April 27, 1921 in Beaver County, Oklahoma, the daughter of Alfred and Ruth (Carroll) Jones. Ruby attended rural grade schools and graduated from Alva High School, Alva, Oklahoma, with the class of 1940. She worked as bookkeeper-cashier, and later manager of the T. G. & Y. in Alva. On September 2, 1942, Ruby was united in marriage to Warren G. Foster in Emporia, Kansas. Warren was in the Navy serving in Orange, Texas, where Ruby joined him. It was there, their son, Gary Lynn was born. Following Warren’s honorable discharge from the service, the family moved to Emporia, where they lived for 13 years, before moving to Eureka in 1958. Ruby was Greenwood County Deputy Clerk for seven years, before becoming Eureka City Clerk - a position she held for 26 years, retiring in 1992. Warren preceded her in death on March 1, 2005. Ruby was a member of the Christian & Congregational Church in Eureka, and the Christian Congregational Women’s Fellowship. She was preceded in death by her parents; husband, Warren; son, Gary Lynn on April 25, 1996; and one sister, Edna (Jones) Danielson. She is survived by three grandsons: Craig Eric and wife, Adrienne Foster of Fairfax, California; Erik William and wife, Julie (Osen) Foster of Lamma, Hong Kong, China; and Stanley Adam and wife, Tina Foster of Emporia, KS; three great-granddaughters: Lily Lynn Foster of Emporia, KS; Magnolia Foster of Hutchison, KS; and Tennessee Blue Foster of Lamma, Hong Kong, China; and one great-grandson, Perry Von Foster of Emporia; along with many other relatives and friends. Funeral services will be held at 10:00 A.M., Friday, September 13, 2019, at the Christian & Congregational Church in Eureka, with Pastor Stan Seymour of the First Christian Church of El Dorado officiating. Entombment will follow in the Greenwood Abbey, Greenwood Cemetery, Eureka. In lieu of flowers, the family has requested that memorials be made to the Christian & Congregational Church or the Eureka Nursing Center. Contributions may be sent in care of Koup Family Funeral Home, P.O. Box 595, Eureka, KS 67045, which is overseeing arrangements. Condolences may be left for the family online, at koupfunerals.com.

Ruby Maye Foster of Eureka passed away Sunday, September 8, 2019, at Eureka Nursing Center in Eureka, at the age of 98. She was born April 27, 1921 in Beaver County, Oklahoma, the daughter of Alfred and Ruth (Carroll) Jones. Ruby attended... View Obituary & Service Information

The family of Ruby Maye Foster created this Life Tributes page to make it easy to share your memories.

Send flowers to the Foster family.