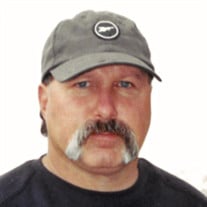 Roger R. Petty Roger Ray Petty of Eureka, died on Saturday, July 22, 2017 at his home in Eureka, at the age of 61. He was born on April 26, 1956, in Eureka, the son of Alvin Earl and Clara “Hope” (Wade) Petty. He was raised in Eureka and attended local schools. He worked for Central Plains Steel in Wichita over 22 years, most recently as a coil line operator. He was well known as a motocross competitor and was an avid hunter, golfer, and boater. On December 13, 2013, Roger was united in marriage to Carol (Becker) Miller in Eureka. He is survived by his wife, Carol of Wichita; his dogs, Sam and Hunter; sister, Ava and husband, Richard Jones of Eureka; nephew, Kyle; nieces, Kacey, and Kristin; and many other family and friends. Funeral services will be held at 10:00 A.M., Tuesday, July 25, 2017 at Koup Family Funeral Home in Eureka with Reverend Kenneth Baker officiating. Interment will follow at Greenwood Cemetery, Eureka. Visitation hours are set from 5:00 P.M. to 7:00 P.M., Monday, at the funeral home. In lieu of flowers, the family has requested that memorials be made to the Angel’s Furever Foundation. Contributions may be sent in care of Koup Family Funeral Home, P.O. Box 595, Eureka, KS 67045 which is overseeing arrangements. Condolences may be left for the family online, at koupfunerals.com

The family of Roger Ray Petty created this Life Tributes page to make it easy to share your memories.

Send flowers to the Petty family.