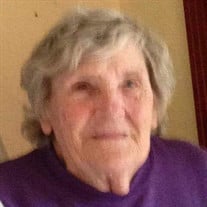 Roberta Louise Rollings of Fall River, died Wednesday, March 20, at her home in Fall River, at the age of 90. Roberta was born September 17, 1928, in Liberty Township, Elk County, to Charles William “Bill” and Gladys (Light) Gramm. She was raised in Fall River, helping her mother while her father worked at the lake. She attended Fall River schools thru the 8th grade, when she had to quit for a time. She later took classes and got to the 11th grade. On January 6, 1958 Roberta was united in marriage to Lyle C. Rollings in El Dorado. The couple lived on a ranch where he worked. To this union six children were born. The couple moved back to Fall River and later to Eureka and Neal until Roberta’s mother died. The family then returned to Fall River to take over her mother’s home. Lyle preceded her in death on January 15, 1983. Roberta moved to Oak Manor for a time, before settling in Fall River until her death. Roberta is survived by her sons: Bill C. Rollings of the home, James C. Rollings of Houston, TX, Gareld E. Rollings of Fall River; two daughters: Ruby M. Parnell of Neodesha, and Elsie R. Offenbacker of Independence; 11 grandchildren; 12 great-grandchildren, and lots of cousins. She was preceded in death by her parents; her husband Lyle; a son, Samuel Clifton Rollings; two siblings; and several aunts, uncles, and cousins. Graveside services will be held at 2:00 P.M., Monday, April 1, at Greenwood Cemetery in Eureka, with Pastor Susan Galvan of the Fall River United Methodist Church officiating. In lieu of flowers, the family has requested that memorials be made to the Fall River Community Center. Contributions may be sent in care of Koup Family Funeral Home, P O Box 595, Eureka, KS 67045, which is overseeing arrangements. Condolences may be left for the family online at koupfunerals.com

The family of Roberta Louise Rollings created this Life Tributes page to make it easy to share your memories.

Send flowers to the Rollings family.