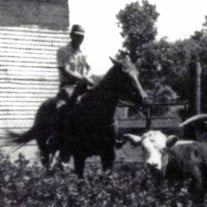 Robert Rex “Bob” Williams of Eureka, died on Friday, January 1, 2021, at the Eureka Nursing Center, in Eureka, at the age of 91. He was born on November 15, 1929, in Granada, Colorado, the son of Clyde Ernest “Buddy” and Gladys Centelia (Nelson) Williams. When Bob was 2, the family moved to the Neal area. Bob attended local schools in the Neal area. Bob lived in Madison for a time, working for his brother, Cecil. On December 28, 1948, Bob was united in marriage to Grace Elizabeth Adella George in Bentonville, Arkansas. To this union, four children were born. They lived in Eureka a short time then made their home in California. In 1963, they returned to Eureka taking up residence on a farm in Spring Creek township. Grace preceded him in death on February 11, 1994. He is survived by his four sons, Eddie and wife, Marsha Williams of Eureka; Rodney and wife, Danette Williams of Emporia; Terry and wife, Cindy Williams of Eureka; and Randy of Eureka; six grandchildren; twelve great-grandchildren; one great-great-grandchild; and three siblings, Grover Williams of Searchlight, Nevada; Marjorie Whitehall of Belfair, Washington; and Melvin “Butch” Williams of Stroud, Oklahoma. He was preceded in death by his parents; wife; step-grandson, Keith Cantu; nine siblings: Dolores Ashlock, Cecil Williams, Maxine Wilson, Melba Pugh, Erma Sherman, Bill Williams, Donald Williams, Johnnie Williams, and Sue Laughlin; and his late-life companion, Jackie Castleberry. Private graveside services will be held at Neal Cemetery. Koup Family Funeral Home is overseeing arrangements. Condolences may be left for the family online, at koupfunerals.com.

The family of Robert Rex "Bob" Williams created this Life Tributes page to make it easy to share your memories.