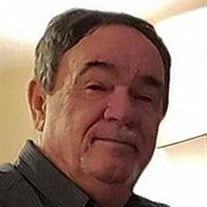 Robert Eugene Runberg of Eureka, died on Saturday, January 23, 2021, at his home near Eureka, at the age of 69. He was born on August 16, 1951, in Wichita, Kansas, the son of Buel and Margree (Helton) Runberg. He was raised in Wichita and graduated from Wichita South High School, later attending Wichita State University. On September 22, 1973, Robert was united in marriage to Kathy Jean Snider in Wichita. They made their home in Wichita and to this union, two children were born. Robert worked for AT&T installing and repairing business phone service. He retired in 2006. They moved to Eureka Lake in 2008. He will be remembered by those who loved him for his jokes and love for making people laugh and his magnetic personality. His joys in life were playing guitar, fishing, photography, grilling, and watching football. He loved smoking a cigar and having a beer, and he loved his dog, watching westerns, and have a deep knowledge of history. He was a member of Sacred Heart Catholic Church and the Lion’s Club. Robert is survived by his wife, Kathy of the home; two children, Sarah Maudlin of Prairie Village, Kansas; and Joe Runberg of Overland Park, Kansas; granddaughter, Lily; and two siblings, Randie Stover of Norman, Oklahoma; and Ronald Runberg of El Dorado. He was preceded in death by his parents. Memorial Mass will be held privately at Sacred Heart Catholic Church with Father Dominic Potnuru officiating. A public service of committal will follow at 11:15 A.M., Saturday, January 30, 2021 at Greenwood Cemetery, Eureka. Masks should be worn, and social distancing observed. Rosary recitation will be held at 7:00 P.M., Friday, January 29, 2021, at Sacred Heart Catholic Church, Eureka. In lieu of flowers, the family requests that memorials be made to Good Shepherd Hospice or to Sacred Heart Catholic Church. Contributions may be sent in care of Koup Family Funeral Home, P.O. Box 595, Eureka, KS 67045, which is overseeing arrangements. Condolences may be left for the family online, at koupfunerals.com.

Robert Eugene Runberg of Eureka, died on Saturday, January 23, 2021, at his home near Eureka, at the age of 69. He was born on August 16, 1951, in Wichita, Kansas, the son of Buel and Margree (Helton) Runberg. He was raised in Wichita and... View Obituary & Service Information

The family of Robert Eugene Runberg created this Life Tributes page to make it easy to share your memories.

Send flowers to the Runberg family.