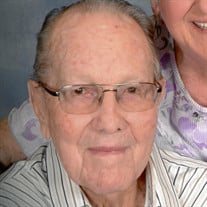 Robert Louis “Bob” Powe of Eureka, died on Thursday, December 5, 2019 at Greenwood County Hospital, in Eureka, at the age of 96. He was born on March 20, 1923, in Eureka, the son of Charles and Elsie (Miller) Powe. He attended Eureka schools. In 1943, Bob joined the United States Army Air Corp where he became a B-25 Bomber pilot during World War 2. Upon his discharge, Bob was united in marriage to Dorothy Lesher in 1946. To this union, three children were born: John, Ronald, and Sharon. This marriage later ended in divorce. On January 14, 1972, he was united in marriage to Glynda Jackson. To this union, one son, Matthew was born. Bob was a truck driver for many years and also farmed. He retired from trucking in 1990 and from farming in 2005. He was a 32nd Degree Mason and a member of the Climax Lodge #411 and Scottish Rite of Wichita. He was a member of the Jefferson Street Baptist Church. Bob is survived by his wife, Glynda of the home; sons, Ronald Powe of Riverside, California; Matthew and wife, Gina Powe of Iola; daughter, Sharon and husband, Walter Adams of Kansas City, Kansas; two stepdaughters, Paula and husband, Tony Milner of Emporia; and Sherry Trevino of Corpus Christi, Texas; seven grandchildren; six step-grandchildren; and several great-grandchildren. He was preceded in death by his parents; brothers, John and Wilbur Powe; one son, John Powe; one grandson, Ted Powe; and one stepdaughter Kim Burtin. Funeral services will be held at 10:00 A.M., Wednesday, December 11, 2019 at Koup Family Funeral Home, in Eureka, with Pastor John Craighead of the Jefferson Street Baptist Church officiating. Interment will follow at Greenwood Cemetery, Eureka. Visitation hours are set from 5:00 P.M. to 7:00 P.M., Tuesday, at the funeral home. In lieu of flowers, the family has requested that memorials be made to the Greenwood County Hospital Foundation. Contributions may be sent in care of Koup Family Funeral Home, P.O. Box 595, Eureka, KS 67045, which is overseeing arrangements. Condolences may be left for the family online, at koupfunerals.com.

The family of Robert "Bob" Powe created this Life Tributes page to make it easy to share your memories.

Send flowers to the Powe family.