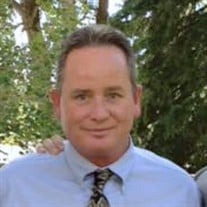 Robert Gene “Bobby” Maclaskey of Augusta, died on Thursday, June 1, 2017, in Butler County, Kansas at the age of 53. He was born on March 16, 1964, in Oklahoma City, Oklahoma, the son of Robert Gene and Martha Lee (Savage) Kincaid. He was later adopted by Bill Maclaskey. He was raised in Eureka and graduated from local schools. He then attended Emporia State University completing Bachelor’s Degrees in Marketing and in Business. He worked mainly in retail management at several businesses including Coastal, Sears, Lowe’s, and Pilot Travel Centers. Recently he was working in insurance sales. On May 19, 1989, Bobby was united in marriage to Ann Wacker in Overland Park, Kansas. To this union, two children were born. This marriage later ended in divorce. Bobby loved hunting, fishing, golfing, and most of all, his boys. He was a member of an archery club during college and greatly loved his time outdoors. He is survived by two sons, Huntyr Robert Maclaskey of Montrose, Colorado; and Drew Kincaid Maclaskey of Boulder, Colorado; and three siblings, Sam McFall of Augusta; Robin Endress of Eureka; and Mary Teichgraeber of Eureka. He was preceded in death by his parents. Memorial services will be held at 11:00 A.M., Monday, June 26, 2017 at Greenwood Cemetery in Eureka with Mr. Jayme A. Koup officiating. Cremation has been effected. In lieu of flowers, the family has requested that memorials be made to the Kansas Humane Society. Contributions may be sent in care of Koup Family Funeral Home, P.O. Box 595, Eureka, KS 67045 which is overseeing arrangements. Condolences may be left for the family online, at koupfunerals.com

The family of Robert Gene "Bobby" Maclaskey created this Life Tributes page to make it easy to share your memories.

Send flowers to the Maclaskey family.