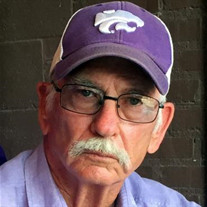 Richard Adams Nixon, of Eureka, died Saturday, July 14, 2018 at the Eureka Nursing Center in Eureka, KS at the age of 74. He was born August 22, 1943 in Fort Scott, KS, the youngest son of Merwin Edgar and Virginia May (Adams) Nixon. While Richard was an infant his family moved to a home 4 miles NE of Eureka, where they established a dairy farm. Richard attended local schools, to include the country school house just up the road, and graduated with the Eureka High School Class of 1961. He attended Kansas State University where he earned a Bachelor of Science degree in Agriculture & Dairy Science. Richard returned home to partner with his father to operate the dairy farm. Following graduation from KSU, he joined the Army National Guard where he was a member of the 169th Engineer Company and the 69th Infantry Brigade as a Platoon Sergeant. During his nine years of service he was awarded a Badge and Bar as a Rifle Sharpshooter. When his father passed away, Richard purchased the dairy and continued to operate it as a Grade A Dairy. He received the “Super Cow” award multiple times as recognition for superior milk quality and production. On May 5, 1968 Richard was united in marriage to Sharon Kay (McCombs) Stever in Eureka. They made their home and raised three children in rural Eureka. After selling the dairy in 1995, Richard worked for Greenwood County for 10 years where he held multiple positions. Richard enjoyed bowling, hunting, snow skiing and spending time at the lake with this family and friends. He was also a member of the KSU judging team, Jaycees and the Rural Water Board. In recent years he also enjoyed delivering Friendship Meals to the community. He was baptized in his youth and attended Jefferson Street Baptist Church. Perhaps Richard’s most consistent passion was his love for KSU football and basketball, as he could spend hours talking about his beloved Wildcats. Richard is survived by his wife of 50 years, Sharon, of the home; three children: Tammy Owen and her husband Randy of Andover; Kimberly Kramer and her husband Larry of Olathe; and Bryan Nixon of Eureka. Five grandchildren: Dalton Owen, Delaney Owen, Lauren Kramer, Bryka Nixon and Jace Nixon. He is also survived by one brother, Gaylon Nixon of Midwest City, OK and a sister, Janis Smith of Overland Park, KS. He was preceded in death by his parents, infant brother Jerry and brother Donald Nixon of Kyle, TX. The family is very grateful to the staff at Eureka Nursing Center. Richard was treated with the upmost respect, kindness and compassion during his stay. In addition to the care of Richard, the staff also took thoughtful care of his family during this difficult time. Memorial services are set for 1:00 P.M., Sunday, July 22, 2018 at Jefferson Street Baptist Church, in Eureka, with Pastor John Craighead officiating. Military honors are being rendered by VFW Post 2712 at the church. Cremation has been effected. A private family inurnment will take place at a later date. The church will host a time for fellowship following the service, please join the family as we share memories of Richard. In lieu of flowers, the family has requested that memorials be made to the Eureka Senior Center or to the Eureka Nursing Center Activity Fund. Contributions may be sent in care of Koup Family Funeral Home, P.O. Box 595, Eureka, KS 67045, which is overseeing the arrangements. Condolences may be left for the family online at koupfunerals.com

Richard Adams Nixon, of Eureka, died Saturday, July 14, 2018 at the Eureka Nursing Center in Eureka, KS at the age of 74. He was born August 22, 1943 in Fort Scott, KS, the youngest son of Merwin Edgar and Virginia May (Adams) Nixon. While... View Obituary & Service Information

The family of Richard Adams Nixon created this Life Tributes page to make it easy to share your memories.

Send flowers to the Nixon family.