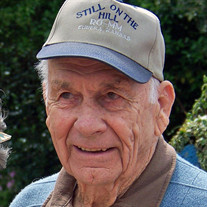 Richard Gale “R. G.” Lewis, lifelong resident of Eureka, passed away Friday, December 20, 2019 at Vintage Park in Eureka at the age of 93. R. G. was born February 22, 1926 in Eureka, the son of Leo Austin “Bill” and Gladys Josephine (Campbell) Lewis. He attended school in Eureka and graduated from Eureka High School three months early to enlist in the Army. He was dispatched to England on the RMS Queen Mary where he joined up with the 28th Reconnaissance troop of the 28th Infantry Division. During his time in the European theatre he fought in the Battle of the Bulge. He was discharged in 1946, having served with honor and dignity. When he returned to the states, he was employed by Tidewater Oil Company in Salyards, Kansas. In 1948, RG was united in marriage to Marie Snider in Eureka. To this union, two daughters were born. Later he opened and ran his lifelong business, Eureka Crane & Tractor. He operated the business for over 50 years retiring in 2016, to enjoy his three hobbies: flying, fishing and gardening. He is survived by his wife of 71 years, Marie Lewis of the home; daughters, Linda and husband, John Cassin of Jefferson City, Missouri; and Karen Starkey of Yates Center; four grandchildren; and seven great grandchildren. He was preceded in death by his parents; brother, Bill Lewis; and sisters, Marilyn Gull and Sally Gustin. The family would like to give special thanks to the staff at Vintage Park at Eureka and the Good Shepherd Hospice for the care received by R. G. A celebration in memory of RG’s life will be held at the Christian & Congregational Church, in Eureka on Saturday, December 28, 2019. Visitation will begin at 1:00 P.M., followed by a memorial service at 2:00 P.M. Cremation has been effected. A family inurnment at Greenwood Cemetery, in Eureka will take place at a later date. In lieu of flowers, the family has requested that memorial contributions be made to the Christian & Congregational Church or Good Shepherd Hospice. Contributions may be sent in care of Koup Family Funeral Home, P.O. Box 595, Eureka, KS 67045, which is overseeing arrangements. Condolences may be left for the family online, at koupfunerals.com.

The family of RG Lewis created this Life Tributes page to make it easy to share your memories.