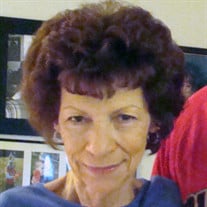 Reta Kay Dauman of Eureka, died on Friday, April 5, 2019 at the Greenwood County Hospital, in Eureka, at the age of 74. She was born on January 26, 1945, in Eureka, Kansas, the daughter of Johnny and Gladys “Charlene” (Coop) Cox. The family moved often when Reta was young but Eureka was always home. She attended local schools. In 1964, she was united in marriage to Harold Glen Beaumont. He was in the Air Force and they lived in many varied places. To this union one daughter was born. This marriage later ended in divorce. On May 26, 1985, Reta was united in marriage to David “Digger” Dauman in Eureka. They made their home in Eureka. Reta worked as a CNA at different places in Eureka, the most noteworthy being nearly fifteen years at the Eureka Medicalodge beginning in 1992. She was an avid fan of the Kansas City Chiefs and was a lifelong enthusiast of music in it’s many different forms. She was also a member of the Veterans of Foreign Wars Post #2712 Auxiliary. She is survived by her husband, David “Digger” Dauman of the home; daughter, Leann Mitchell of Eureka; two grandchildren: Jamie Taylor and Justin Mitchell; two great-grandchildren: Zoey and Wyatt Taylor; and two siblings: Mike Blevins of Carthage, Missouri; and Patty Robinson of Joplin, Missouri. She was preceded in death by her parents, and one brother, Kelly Blevins. Memorial services will be held at 1:00 P.M., Monday, April 15, 2019 at Greenwood Cemetery, in Eureka, with Rev. Hyun Jung Choi of the First United Methodist Church officiating. Cremation has been effected. In lieu of flowers, the family has requested that memorials be made to the Veterans of Foreign Wars Post #2712 Auxiliary or to Greenwood County Hospital. Contributions may be sent in care of Koup Family Funeral Home, P.O. Box 595, Eureka, KS 67045, which is overseeing arrangements. Condolences may be left for the family online, at koupfunerals.com.

The family of Reta Kay Dauman created this Life Tributes page to make it easy to share your memories.

Send flowers to the Dauman family.