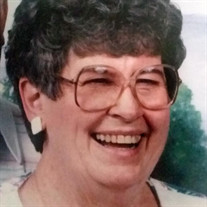 Phyllis “Pauline” Grooms of Eureka, died on Thursday, January 17, 2019, at Eureka Nursing Center in Eureka, at the age of 89. She was born May 1, 1929, in Reece, the daughter of Allen Paul and Fern (Seymour) Jones. She was raised in Reece and graduated from Eureka High School. She was a bookkeeper for her father’s car dealership and worked at Zenishek’s. On November 7, 1948, Pauline was united in marriage to Tommie Lee Grooms in Eureka. They made their home in Eureka, and Pauline worked at Citizens Bank until their first child was born. Following his birth, she became a homemaker, content to raise their two sons, and take care of the home. As the boys grew more independent, Pauline went to work at the Greenwood County Courthouse, working on oil rendition sheets for several years. Tommie preceded her in death on April 15, 2011. She was a member of the First United Methodist Church of Eureka. Pauline is survived by her sons, Bradley of Kansas City, Missouri; and Bruce of Fredonia; three grandchildren; four great-grandchildren; and two cousins. She was preceded in death by her parents, and husband. Memorial services will be held at 1:00 P.M., Friday, January 25, 2019, at the First United Methodist Church in Eureka, with Pastor Hyun Jung Choi officiating. Inurnment will follow at Greenwood Cemetery. In lieu of flowers, the family has requested that memorials be made to the First United Methodist Church. Contributions may be sent in care of Koup Family Funeral Home, P.O. Box 595, Eureka, KS 67045, which is overseeing arrangements. Condolences may be left for the family online, at koupfunerals.com.

The family of Phyllis Pauline Grooms created this Life Tributes page to make it easy to share your memories.

Send flowers to the Grooms family.