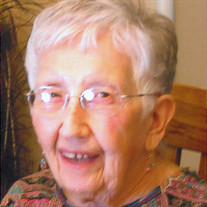 Phyllis Irene (Grundy) Broddle, formerly of Eureka, died on Saturday, May 14, 2016, at Hillside Village of De Soto, in De Soto, Kansas, at the age of 95. She was born on July 30, 1920, in Climax, the daughter of Lowell Benjamin and Alma (Nitsche) Grundy. She was raised in Greenwood and Elk Counties attending Climax Grade School and graduating from Piedmont High School with the Class of 1938. She received Normal Teachers Training by Emporia State Teacher’s College and taught for three years in one-room country schools near Climax, in Greenwood County. On May 12, 1939, Phyllis was united in marriage to Warren Dale Broddle in Independence. They made their home in rural Greenwood County, and later moved to Wichita. During World War II, Phyllis returned to Eureka until Warren’s discharge, at which time they lived in the country again. They retired to Wichita, and later lived in Arkansas and traveled around the country. He preceded her in death on January 13, 2010. Phyllis was a member of the First United Methodist Church of Eureka, the Central Christian Church of Wichita, the Derby Christian Church, the Lawrence Heights Christian Church of Lawrence, the Tonovay PTA, and the Tonovay Ladies Club. She is survived by four children, Bill Broddle of Houston, Texas; Larry Broddle of Eudora; Janice Taylor of El Dorado; and Nancy Nelson of Nashville, Indiana; ten grandchildren; and sixteen great-grandchildren. She was preceded in death by her parents, husband, and eight siblings: Vernon, Herman, John, Eugene, Ernest, Victor, Herschell, and Betty. Memorial services will be held at 2:00 P.M., Thursday, May 19, 2016 at Koup Family Funeral Home with Pastor Steve Koberlein of the Lawrence Heights Christian Church officiating. Cremation has been effected. Inurnment will follow at Greenwood Cemetery, Eureka. In lieu of flowers, the family has requested that memorials be made to Hillside Village of De Soto. Contributions may be sent in care of Koup Family Funeral Home, P.O. Box 595, Eureka, KS 67045, which is in charge of service arrangements.

Phyllis Irene (Grundy) Broddle, formerly of Eureka, died on Saturday, May 14, 2016, at Hillside Village of De Soto, in De Soto, Kansas, at the age of 95. She was born on July 30, 1920, in Climax, the daughter of Lowell Benjamin and Alma (Nitsche)... View Obituary & Service Information

The family of Phyllis Irene (Grundy) Broddle created this Life Tributes page to make it easy to share your memories.

Send flowers to the Broddle family.