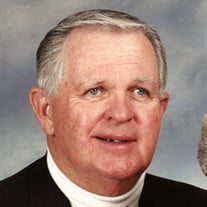 Phillip Elwin Johnston of Eureka, died on Friday, March 30, 2018 at the Kansas Christian Home in Newton, Kansas, at the age of 83. He was born on December 12, 1934, in Yates Center, Kansas, the son of Sidney Warren and Nina (Cortelyou) Johnston. He was raised in Climax and Eureka, graduating from Eureka High School. He joined the United States Air Force Reserve after school and later transferred to the United States Navy serving aboard the USS Hornet and the USS Wasp in the Pacific. After his discharge, he attended Emporia State Teachers College and completed a bachelor’s degree in Business Education, after which he attended Kansas State University and graduated with a master’s degree in Education. He also completed a post graduate specialty in Education Administration at Fort Hays State University. Phil’s first job was at Manhattan High School from 1961 to 1970. On June 1, 1963, Phil was united in marriage to Ann Gordon in Eureka. They made their home in Manhattan. In 1971, Phil became principal of the high school in Russell, Kansas. In 1973, he became the principal of the junior high school in Independence, Kansas, and then returned to Eureka in 1974 to be the Eureka High School principal. In 1980, he became principal of Kenneth Henderson Junior High School in Garden City, Kansas. He later became superintendent of schools for the Elkhart school district from 1987 to 1994, at which time he retired to Eureka. In 1995 he found retirement too boring and served as the interim superintendent for the Tonganoxie, Kansas school district. He retired for good in 1996, at which time he did odd jobs for Flint Oak hunting lodge in Fall River, and began a Greenwood County history program on 93.5 KOTE FM Eureka. He was a past president of the Kansas Association of School Principals, a Silver Haired Legislator\Lobbyist, and a member of the Elkhart Chamber of Commerce, Phi Delta Kappa, the Benevolent and Protective Order of Elks, the Kiwanis Club, and the Eureka Country Club. He was an avid hunter, fisher, and golfer. Phil is survived by his wife, Ann of the home; his two children, Kim Wiens of Shawnee, Oklahoma; and Mike Johnston of Overland Park, Kansas; and six grandchildren. He was preceded in death by his parents, and eight siblings: Laurene Harrod, Edith Pearson, Caroline Buchannan, Frank Johnston, Sidney Johnston, Irma McFall, Imogene Duncan, and Leslie E. Johnston. Funeral services will be held at 10:00 A.M., Tuesday, April 10, 2018 at the First United Methodist Church in Eureka with Reverend Kenneth A. Baker officiating. Interment will follow at Greenwood Cemetery in Eureka. Visitation hours are set from 5:00 P.M. to 7:00 P.M., Monday, at the funeral home. In lieu of flowers, the family has requested that memorials be made to the Phillip E. Johnston Memorial Scholarship Fund or to the First United Methodist Church. Contributions may be sent in care of Koup Family Funeral Home, P.O. Box 595, Eureka, KS 67045, which is overseeing arrangements. Condolences may be left for the family online, at koupfunerals.com.

Phillip Elwin Johnston of Eureka, died on Friday, March 30, 2018 at the Kansas Christian Home in Newton, Kansas, at the age of 83. He was born on December 12, 1934, in Yates Center, Kansas, the son of Sidney Warren and Nina (Cortelyou) Johnston.... View Obituary & Service Information

The family of Phillip "Phil" Johnston created this Life Tributes page to make it easy to share your memories.

Send flowers to the Johnston family.