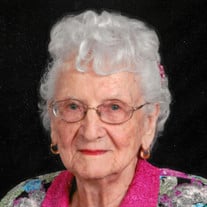 Pauline Burnham, age 102 years, passed away at LakePoint Nursing Home in El Dorado on February 24, 2021. She was born May 25, 1918 in Eminence, Shannon County, Missouri to the late Overton and Mattie C. (Hearst) Smith. She was the youngest of 11 children. After graduating from high school in Missouri, Pauline moved to El Dorado to live with her sister where she found a job working for a lawyer. Pauline met Mac C. Burnham on the golf course in El Dorado and on May 3, 1941, they were married. To this union two children were born. He preceded her in death on December 26, 2004. Pauline worked for and retired from 1st National Bank in El Dorado and was also active in the 1st Christian Church as well as being a Pink Lady at the Susan B. Allen Memorial Hospital for many years, receiving an award for her many hours of volunteering. She was active in several organizations and used to play cards with a group of friends in her spare time. She enjoyed traveling when Mac was still alive, and they were both able. She is survived by her son, Don M. and wife, Linda Burnham of Arizona; and daughter, Lynnie Teter, of Eureka, Kansas; four grandchildren, Mike Burnham of North Carolina; Melissa Teter-Richard of Towanda, Kansas; Allison Jones of Florida; and Andrew Burnham of California; thirteen great-grandchildren; and two great-great grandchildren, including her beloved Kamryn Lyn Bohl of Eureka, Kansas. Pauline is preceded in death by her parents; siblings; husband, Mac Burnham; and her son-in-law, A. Eldon Teter. Graveside services will be held at 11:00 A.M., Tuesday, March 2, 2021, at Sunset Lawns Cemetery, El Dorado, Kansas, with Pastor John Martyn of the Towanda United Methodist Church officiating. Cremation has been effected. Masks should be worn and social distancing observed. In lieu of flowers the family requests memorials be made to the Susan B. Allen Memorial Hospital Auxiliary Board. Contributions may be sent in care of Koup Family Funeral Home, P.O. Box 595, Eureka, KS 67045, which is overseeing arrangements. Condolences may be left for the family online, at koupfunerals.com.

Pauline Burnham, age 102 years, passed away at LakePoint Nursing Home in El Dorado on February 24, 2021. She was born May 25, 1918 in Eminence, Shannon County, Missouri to the late Overton and Mattie C. (Hearst) Smith. She was the youngest... View Obituary & Service Information

The family of Pauline Burnham created this Life Tributes page to make it easy to share your memories.

Send flowers to the Burnham family.