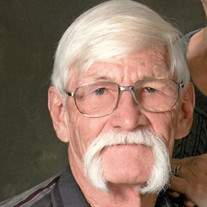 Paul Junkersfeld of Eureka, Kansas died on Monday, May 14, 2018, at his home in Eureka, at the age of 75. He was born May 15, 1942, in Pocahontas, Arkansas, the son of Alvin Albert and Evelyn Pauline (Holt) Junkersfeld. He was raised in the Pocahontas area and graduated from St. Paul’s Catholic High School. On July 21, 1962, Paul was united in marriage to Jane Thielemier in Engelberg, Arkansas. They made their home in Engelberg and to this union, six children were born. The family later moved to Texas and Paul worked in the gas industry and the family moved to Kansas in 1984. While in Kansas he opened a used car dealership. He loved racing, especially Nascar, and was an avid hunter throughout his life. He was a member of Sacred Heart Catholic Church and Knights of Columbus. He is survived by his wife, Jane of the home; his children, Mark Junkersfeld and partner, Jolie Schmutz of Eureka, Kansas; Paul A. Junkersfeld of Grapevine, Texas; Deana and husband, Daren Yohe of Mulvane, Kansas; Janel Junkersfeld of Overland Park, Kansas; Roy and wife, Jamie Junkersfeld of Eureka, Kansas; and Grace and husband, Ramon Lujan of Belle Plaine, Kansas; nine grandchildren; three step-grandchildren; two great-grandchildren; and three siblings, Otis Junkersfeld of Pocahontas, Arkansas; Anna Pearl Stockwell of Pocahontas, Arkansas; and Alvin Junkersfeld, Jr. of Pocahontas, Arkansas. He was preceded in death by his parents and one brother, Jerry Junkersfeld. Mass of Christian Burial will be held at 11:00 A.M., Saturday, May 19, 2018 at St. John’s Catholic Church in Engelberg, Arkansas. Interment will follow at St. John Cemetery, Engelberg. Visitation hours are set from 5:00 P.M., to 7:00 P.M., Thursday, at Koup Family Funeral Home, Eureka, Kansas. Rosary recitation will begin at 6:30 P.M. Thursday. In lieu of flowers, the family has requested that memorials be made to St. Jude Children’s Research Hospital. Contributions may be sent in care of Koup Family Funeral Home, P.O. Box 595, Eureka, KS 67045, which is overseeing arrangements.

Paul Junkersfeld of Eureka, Kansas died on Monday, May 14, 2018, at his home in Eureka, at the age of 75. He was born May 15, 1942, in Pocahontas, Arkansas, the son of Alvin Albert and Evelyn Pauline (Holt) Junkersfeld. He was raised in the... View Obituary & Service Information

The family of Paul Dean Junkersfeld created this Life Tributes page to make it easy to share your memories.

Send flowers to the Junkersfeld family.