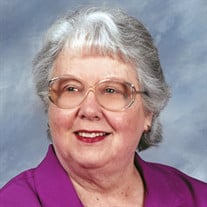 Patricia “Pat” Crouch Patricia Glee “Pat” Crouch of Eureka, died on Tuesday, December 12, 2017 at the Greenwood County Hospital, in Eureka, at the age of 82. She was born on August 13, 1935, near Climax, Kansas, the daughter of Marlin Frederick and Edith Irene (Martin) Ferguson. She was raised in the Climax area and graduated from Climax High School with the class of 1952. Pat’s mother died when she was very young, and Marlin married Luella Mae Prichard who also reared the children. She later attended Kansas State Teacher’s College and went to work in Wichita and then moved to Eureka and began working for Forbes & Pohl Attorneys at Law. On September 24, 1955, Pat was united in marriage to Delbert Leroy “Pete” Crouch in Eureka. She was a member of the First United Methodist Church of Eureka where she served as choir director for over 35 years. She retired from Forbes & Pohl in 2005 after over 50 years employment. Pat loved her family and her cats. She played the piano some and was generally known as a good and loving person. She is survived by two sons, Dick Crouch of Garden City; and Dan and wife, Gale Crouch of Eureka; three grandchildren: Brandon Crouch, Mingee Crouch, and Janna Roberts; four great-grandchildren; sister, Fredda Helm of Topeka; and several nieces and nephews. She was preceded in death by her parents and husband. Funeral services will be held at 10:00 A.M., Wednesday, December 20, 2017 at the First United Methodist Church in Eureka with Reverend Kenneth Baker officiating. Interment will follow at Greenwood Cemetery. In lieu of flowers, the family has requested that memorials be made to the Patricia Crouch Memorial Fund. Contributions may be sent in care of Koup Family Funeral Home, P.O. Box 595, Eureka, KS 67045 which is overseeing arrangements. Condolences may be left for the family online, at koupfunerals.com.

The family of Patricia G. "Pat" Crouch created this Life Tributes page to make it easy to share your memories.

Send flowers to the Crouch family.