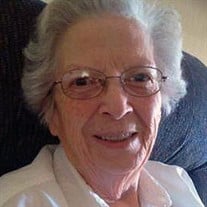 Patricia Ann Britain of Eureka, went to her heavenly home on February 4, 2021 at Greenwood County Hospital, in Eureka, at the age of 88. She was born on February 25, 1932 in rural Greenwood County to William Franklin, Sr., and Eva Rachel (Scott) Hodgson. She was raised in the Eureka area and attended local schools. She graduated from Eureka High School with the Class of 1950. Pat worked as a telephone operator, “number please,” in Eureka and Emporia. On May 26, 1952, Pat was united in marriage to Norman Eugene Britain in Eureka. They welcomed two sons to their family. The family lived in Kansas and many years in California. Norman preceded her in death in 2004. She enjoyed golf, reading, crocheting, and spending time with family, especially her grandson, Marcus Britain. Pat never forgot a birthday. Her cards and phone calls will be missed. She is survived by her sons: Robert and wife, Denise Britain of Klamath Falls, Oregon; and Daniel Britain and Leanne of Eureka; six grandchildren: Zachary, Patricia, Marcus, Alicia, Kayla, and Jozie; and four great-grandchildren, Marley, Jameson, Cora, and Jase; four siblings: Bill and wife, Frankie Hodgson of Eureka; Mary Hodgson of Eureka; Sue and husband, Wayne Wiggins of Eureka; and Gerry and husband, Mike Larcom of Reece; and numerous nephews, nieces, cousins, and friends. She was preceded in death by her parents; husband; and sister, Virginia Ardie Deeder. Due to COVID-19, a private family memorial service will take place at a later date. Cremation has been effected. Inurnment will follow at Greenwood Cemetery, Eureka. In lieu of flowers, the family has requested that memorials be made to the Greenwood County Hospital Foundation. Contributions may be sent in care of Koup Family Funeral Home, P.O. Box 595, Eureka, KS 67045, which is overseeing arrangements. Condolences may be left for the family online, at koupfunerals.com.

Patricia Ann Britain of Eureka, went to her heavenly home on February 4, 2021 at Greenwood County Hospital, in Eureka, at the age of 88. She was born on February 25, 1932 in rural Greenwood County to William Franklin, Sr., and Eva Rachel... View Obituary & Service Information

The family of Pat Britain created this Life Tributes page to make it easy to share your memories.

Patricia Ann Britain of Eureka, went to her heavenly home on...

Send flowers to the Britain family.