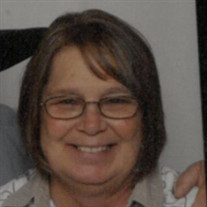 Pamela Joyce Smith, of Toronto, KS, died Thursday, April 7, 2022, at Select Specialty Hospital in Kansas City, KS, at the age of 67. She was born April 20, 1954, in Oklahoma City, Oklahoma, the daughter of Kenneth and Reba Jewel (McEnany) Pennington. She was raised in Ponca City, and attended local schools, graduating with the Ponca City High School Class of 1972. Following graduation, Pam attended business school, then moved on to Northern Oklahoma College, where she earned an Associate’s Degree in Animal Science. She later attended Oklahoma State University, furthering her education. On December 11, 1992, Pam was united in marriage to James Ray Smith in Blackwell, OK. They made their home in Burbank, OK, then moved to Ponca City where they lived until 1997. The family then moved to Kearney, MO, where they made their home until retiring to Toronto, KS. Pam loved to sew, and loved helping people; but most of all she loved serving her Lord. She had a food ministry, and was always willing to lend a helping hand when needed. She was a faithful member of the Toronto Cowboy Church. Pam is survived by her husband Jim, of the home; seven children: Jeff James of Marion, KS; Christie Condit of Bartlesville, OK; Amy Wilson of Ardmore, Oklahoma; Casey Smith of Kearney, MO; Jeromy James of Marion, KS; and Kaiden Don and Jacob Ray Smith of the home; 20 grandchildren; 6 great-grandchildren; and one sister Linda Nichols, of Denver, CO. She was preceded in death by her parents. Cremation has been effected with no services at this time. Condolences may be left for the family online at koupfunerals.com

The family of Pamela Joyce Smith created this Life Tributes page to make it easy to share your memories.